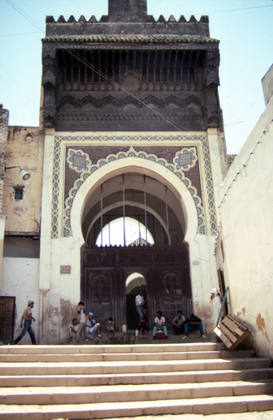 Share
Like its counterpart Qarawiyyin Mosque, the Andalusian Mosque began as a small, modest neighborhood mosque, but became the congregational mosque of the quarter in the 10th century.  The mosque's present appearance is the result of a series of additions and reconstruction dating from between the tenth and fourteenth centuries.  In the 10th/4th AH century the Umayyad Caliph added the minaret, and Almohad Caliph Muhammad al-Nasir (r. 1199–1213/ 595–610 AH) built the north entrance.  The portal of the mosque was constructed in the 13th century by artisans from the Nasrid kingdom of Granada.  With its ornamentation of colorful glazed tiles and carved stucco, and its  monumental cornice of carved cedar wood, the portal reflects the strong cultural and political ties that existed between Fez and Islamic Spain. 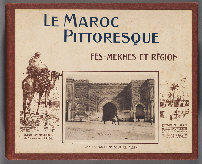 Translation: Picturesque Morocco: Fès-Meknes and the région: album of photographs by Commander Laribe; Preface and notes by Mr. Réveillaud and Mr. Alfred Bel