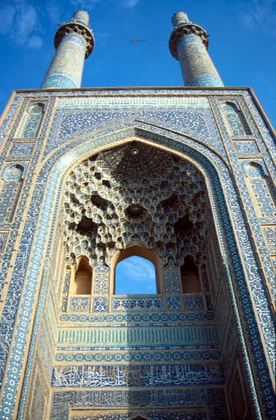 Share
Situated adjacent to the center of the town of Yazd, the complex of the Friday mosque of Yazd was founded in the twelfth century; however, what stands on the site today is the new mosque (masjid-i jadid) built in 1324 under the Il Khanids, and later augmented in 1365 under the Muzaffarids. During the eighteenth and nineteenth centuries the mosque underwent further developments that added to its medieval nucleus. These multiple historical layers are most evident in the courtyard: to the east are the ruins of an early, pre-Saljuk mosque; to the south are fourteenth-century structures, and to the west are late eighteenth and nineteenth-century additions.

According to Tarikh-i-jedid-i-Yazd ("The New History of Yazd"), written in 1323 CE by Ahmad ibn Husayn ibn 'Ali al-Kateb, the site adjacent to the earlier mosque was acquired by Sayyed Rukn ad-din Muhammad, who ordered the construction of an iwan with upper galleries, a domed chamber, and halls for prayer. Despite his death in 1330, work continued until the iwan and its galleries were completed. Three important aspects distinguish the Friday mosque of Yazd: its structural innovation, its remarkable decoration, and its being the "earliest" mosque upon which later fifteenth-century mosques in the Yazd region were modeled.

The mosque encloses a rectangular open court, measuring approximately 18 by 46 meters. (Sources differ on these measurements; those described here are based upon a measured drawing). The court surrounded on all four sides by one-story arcades of pointed-arch vaults resting on massive square piers. The complex's main portal iwan is located on the east side of the court; the domed chamber (12 by 12 meters) with the main iwan preceding it occupies the center of the southern side of the court. The iwan has galleries on the second level. These permit access to the arcades' roofs, enabling circumnavigation of the complex. Two rectangular "winter" prayer halls flank the domed chamber and extend halfway along the western and eastern arcades' walls. The area of the building which includes the domed chamber and the two winter halls measures 46 by 54 meters; the courtyard including the bays of arcades measures 27 by 54 meters.

A distinctive feature of the complex is the tall eastern portal iwan surmounted by two soaring minarets on each side. This portal iwan, which is a common architectural prototype of the Il Khanid period, is here given a high degree of monumentality by the verticality of the two tall minarets and the vertical orientation of the moldings' lines. This portal iwan is immediately followed by a domed vestibule, which connects to the southern prayer hall and gives access to the mosque's court from the east. The dome of the vestibule rests on eight squinches, from which ascend eight ribs that intersect at the top of the dome and form a smaller octagonal perforated nucleus, allowing light to infiltrate into the space. S web of secondary, thinner ribs branches from these main thin ribs (which ascend from the corners formed by the squinches), framing geometrical patterns of glazed and unglazed terracotta in black, white, and blue.

The prayer halls, which each measure 16 by 40 meters, were built ca. 1360 of mud brick. They have a very complex vaulting system which originated with the Sassanids and was later used by the Il Khanids (in both the Madrasa of the Friday Mosque of Isfahan and the iwan at Garladan). Transverse cross arches segment the space into bays, which are articulated by barrel vaults running perpendicular to these transverse vaults. In the two "winter" prayer halls, the space is divided by the transverse arches into six bays. The width of the transverse arches varies, depends on the width of the piers that demarcate the sides of the domed chamber and the iwan. These prayer halls are illuminated by large high windows, positioned on white walls, contrasting with the polychromatic palette of the decoration of the domed chamber.

Another important structural feature of the mosque is the dome of the prayer chamber. It consists of two domes: a dome inside a dome, with a space of a half meter separating them at their base. The dome rises on squinches and the entire decoration of the chamber and the galleries is a combination of plain and glazed terracotta. In the interior, the dome is ornamented with a hazarbaf geometric revetment in blue and beige-yellow forming a geometric arabesque descending from a concentric zigzagged medallion of small tile pieces at the center of the dome. The exterior dome is revetted with a geometric arabesque of blue and black tile mosaics on a beige background. In 1375, the decoration of the dome was finished and a mihrab was installed in the domed chamber.

The mihrab is a half-octagonal niche in the qibla wall, fully decorated with a glazed tile mosaic revetment of floral motifs, predominantly in blue and white and surmounted by a muqarnas vault. The mihrab's pointed arch is framed by a calligraphic inscription band in white thuluth script on a blue background. Above the dado of the domed chamber, hexagonal tiles in light blue geometrical patterns are formed from a multiplication and rotation of the word "Allah."

The arcades of the court are, for the most part, decorated with carved terracotta. The vault of the soaring portal iwan is surmounted by a muqarnas units in blue, white, and ochre, ascending to a smooth semi-dome medallion decorated in concentric rings of floral arabesque. These muqarnas units inscribe, as they spatially cluster, star-shaped surfaces of various sizes containing calligraphic medallions or floral patterns. Script bands run horizontally and vertically, bordering the pointed arch of the iwan and the surfaces of its recesses.

Most of the decoration in the building was added under Muzaffarid rule, after they succeeded the Il Khanids. The variety of decorative techniques and forms of colored glazed tile mosaic work and (unglazed) carved terracotta, juxtaposed in different ways, articulates the richness and diversity of the decoration and the play of materials and colors and reflects the cumulative history of the mosque's construction and reconstruction. 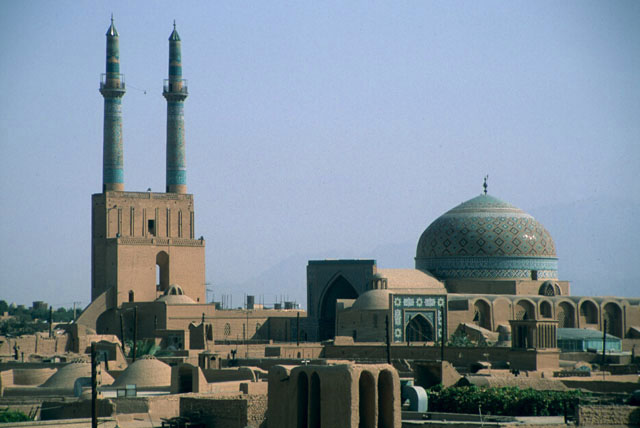