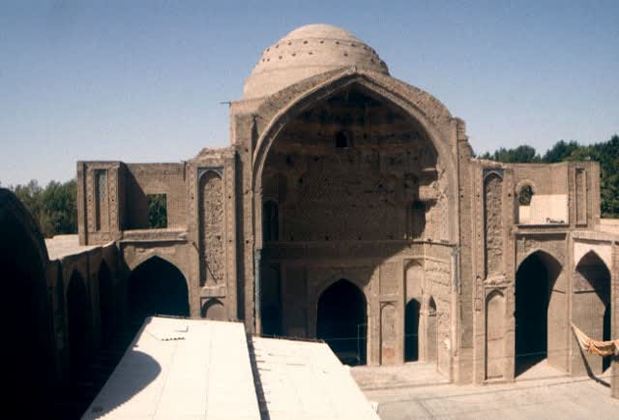 The Congregational Mosque of Varamin is the earliest surviving example of a mosque constructed by the Ilkhanids of Iran. An inscription dates the mosque to 722 AH (1322 CE), and names the original patrons as Muhammad ibn-i Muhammad ibn-i Mansur Quhadi and his son Hasan. Another inscription names the original architect as an ‘Ali Qazvini. Another inscription indicates that the Amir Ghiyath al-Din Yusuf Khvajah commissioned repairs to the mosque during the reign of Timurid sultan Shahrukh (r. 1405-1477/807-850 AH). In the 17th/11th century AH, the western side of the mosque collapsed in a flood. Modern restorations rebuilt this area in 1998/1373 Solar Hijri.

The mosque follows the four-iwan plan for mosques first attested in the Mosque of Zavarah. An arcade rising a single story originally surrounded the mosque’s relatively small central courtyard (25 x 25 m), at whose center is a fountain. The mosque’s main (north) façade includes a monumental entrance portal that projects out from the façade. This portal is flanked on either side by blind pointed arches. The portal leads through a vestibule and across an aisle into the courtyard’s north iwan.

On the qibla (south) side of the courtyard, a broad and shallow iwan with an arched muqarnas semidome leads onto a domed hall with a mihrab. The dome rises from a sixteen-sided drum with alternating windows, resting on an octagonal transitional area formed by four squinches. The height of the dome chamber, which rises above the height of the other iwans, accentuates this important space. This impression of size is most prominent when one passes from the low vault of the iwan to the lofty space of the domed chamber. On either side of the domed hall, passageways lead onto shabistans (covered prayer halls) supported by thick piers.

The qibla iwan before the dome chamber is decorated with richly ornamented geometric patterns in terracotta, above which an inscription band runs horizontally and marks the beginning of the iwan's vault, which comprises a cluster of muqarnas units. These units are in turn constructed out of smaller bricks.

Intricate plaster floral and vegetal motifs decorate the mihrab's niche as well as the wall surrounding its pointed arch. An inscription band frames the mihrab's portal, beyond which plaster spreads like a three-dimensional tapestry to cover the whole wall. The other three walls display geometric patterns in terracotta. In many areas, bricks are displayed so that they extend from the wall to highlight its sculptural qualities.

The dome features a sunburst medallion at its center from which descends an arabesque of a diamond geometric motif that expands with the curve of the dome. The spandrels of the arches of the four squinches feature glazed terracotta and incorporate in their vaults three tiers of muqarnas. Four windows are situated on the walls of the chambers, each between two squinches.

For most contemporary architectural historians, the Friday mosque of Varamin continues to epitomize the first crystallization of a four-iwan mosque by the Il Khanids, but also a monumentality achieved by the delicacy of ornament, the display of rich materials, and the play of light and shadow of the sculptural architectural elements. 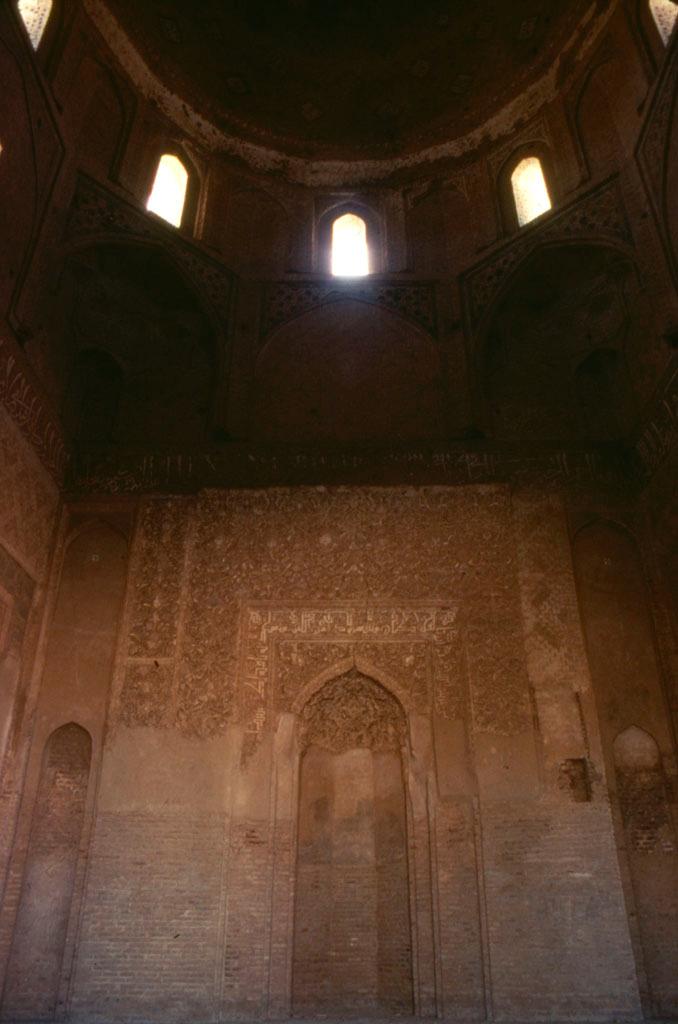