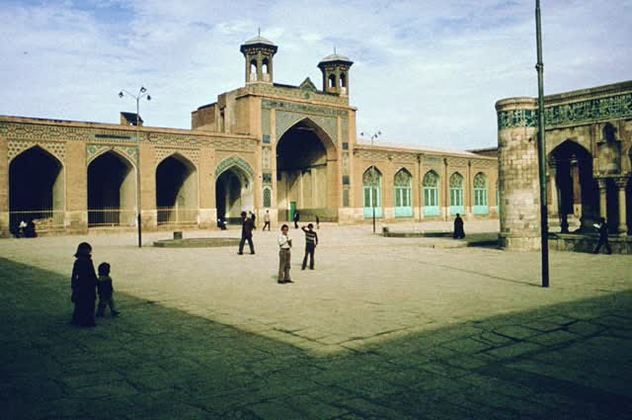 Share
The Friday Mosque of Shiraz, also known as the Masjid-i Atiq, was first built in 875 during the reign of Saffarid ruler Amr b. al-Layth (878-900). It was rebuilt, restored, and expanded various times thereafter. Most of the present day structure -- a four-iwan courtyard mosque -- dates from the seventeenth century. Damaged by numerous earthquakes, it was repaired and restored extensively after 1935. The center of its courtyard is occupied by the Khuda Khane (lit. House of God). Commissioned by Inju'id ruler Mahmud Shah (1325-1336) in 1351 for the storage of Qur'ans, this small kiosk is also known as Bayt al-Mashaf (House of Qur'ans, or House of Books). Both the mosque and Khuda Khane are aligned with qibla slightly east of south.

The kiosk known as Khuda Khane consists of a rectangular core, with a loggia of three arched bays on each side, with solid circular towers projecting at the outer corners. The ensemble is raised on a marble platform. Only the towers, the platform and ruined inner walls were remaining of the original structure in the early twentieth century. It was rebuilt between 1937 and 1954 by the Archaeological Service of Iran based on the original design.

Elongated on the north-south axis, the rectangular core of the Khuda Khane contains a square hall with four central doorways, and a small vestibule to its north housing a spiral staircase for roof access. The four doorways on its exterior -- three for the square hall and one leading into the vestibule -- are flanked by engaged columns and topped with flat muqarnas crowns.

The core, which measures about five and a half by seven meters, is enveloped by two-meter wide loggias to the east, west and north. The southern loggia, which faces the mosque sanctuary, is three and a half meters wide. The twelve pointed arches of the veranda are carried on marble columns with bulbous bases and muqarnas capitals and square columns built into the corner towers. The arches of the east and west loggias are slightly wider; they are separated with rectangular panels resting on two pairs of columns at the center. A muqarnas cornice wraps around the loggia arcades and the corner towers below the flat roof.

The Khuda Khane is built of rubble masonry and clad entirely with alternating square and rectangular panels of cut stone. It is adorned with a wide tile band below the muqarnas cornice containing a white thuluth inscription on a blue background with floral arabesques. The sides of the base platform are carved in relief with floral medallions. The date of construction 1935 (752 A.H.) is seen on the southeast tower.

Pope, Arthur Upham. "The Photographic survey of Persian Islamic Architecture." Bulletin of the American Institute for Persian Art and Archaeology 7 (1934): 21-38. 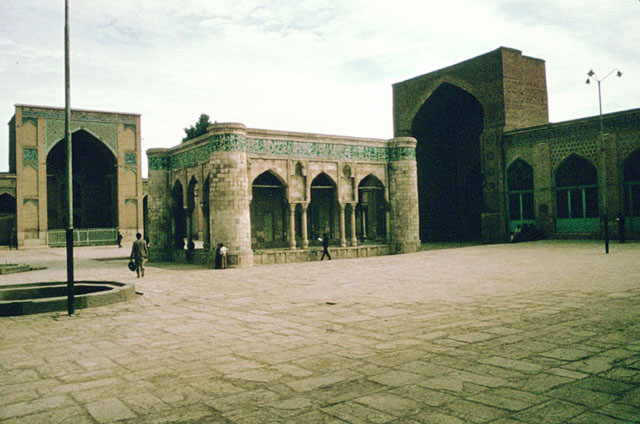