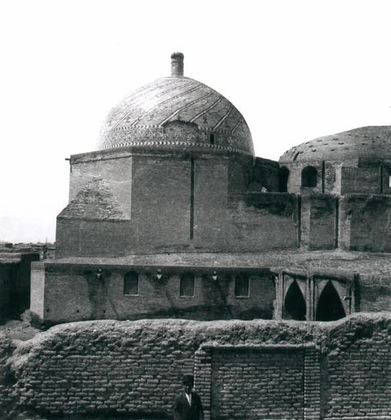 Share
The Friday mosque of Qazvin is one of the oldest mosques in Iran. Originally built on the site of a Sassanid fire temple, it was subsequently developed and expanded over several different periods. Its construction was first ordered in 807 (192 AH) by the Abbasid Caliph Harun Al-Rashid. Under the Seljuk leaders (1038-1194), two iwans were added to its north. After a renovation in the eleventh century, the twelfth century saw the construction of the main prayer hall, a dome, a courtyard, and a religious school. Under the Safavids (1501-1732), the southern and western iwans and arcades were added, and the Qajar period (1779-1924) witnessed a major renovation and expansion.

The mosque follows the four-iwan typology; each iwan is centered on a large courtyard with a central fountain. This courtyard is one of the largest mosque courts in Iran, measuring nearly four thousand square meters. Its two main prayer halls are located along the north and south sides of the court. Two narrow arcaded halls, five meters wide, run along the east and west.

The southern iwan, built by the Safavid ruler Abbas II in the seventeenth century, is considered to be the most important. It measures fourteen and a half meters wide by twenty-one meters high. Adjoining the rear of the iwan is a square prayer hall, fourteen meters per side and roofed by a large dome, that dates to the Seljuk period. A mihrab is located on the south wall of this prayer hall. The southern iwan is two stories high; five rooms on the upper floor are accessed via a staircase.

The western iwan, built by the Safavid ruler Soleiman, is flanked by two corridors running north-south that allow access to the rear of the iwan. The northern iwan was putatively built by Tahmasp, another Safavid ruler. This iwan was renovated in the Qajar period. Elevated from the courtyard, it is eleven meters wide and flanked by two minarets, each twenty-five meters high. The eastern, unornamented, iwan was built in the nineteenth century by the governor of Qazvin.

The main entrance to the mosque is on the east side through a portal, linked with a narrow corridor to the mosque courtyard with its central fountain. This court also contains a ten-step staircase, located between the fountain and the east iwan, that leads down to a canal. Two smaller courtyards are located at the northwest and northeast corners of the mosque.

The mosque is constructed of brick, which is clad with tiles and inscriptions in some areas. The main prayer hall is the most ornamented part of the mosque. Both its mihrab and minbar are made of stone, and the upper part of the walls is ornamented in different floral patterns and small polychrome tiles. Carved Kufic and Sols inscriptions decorate the walls, and their quality is such that, nine centuries later, they are still used as a reference for the study of these scripts. This prayer hall is roofed with a large double-shelled Seljuk dome that rests on the hall's thick columns. In comparison with other domes of the same period, this dome remains in good condition. On its exterior, the dome is decorated with tiles and floral patterns.

A half-dome roofing the south iwan also has a double-shell structure. The two northern minarets are clad with colorful tiles in floral patterns. The interior of the iwans are decorated with muqarnas; in the north iwan, these muqarnas are stuccoed, while those in the southern iwan are of exposed brick. 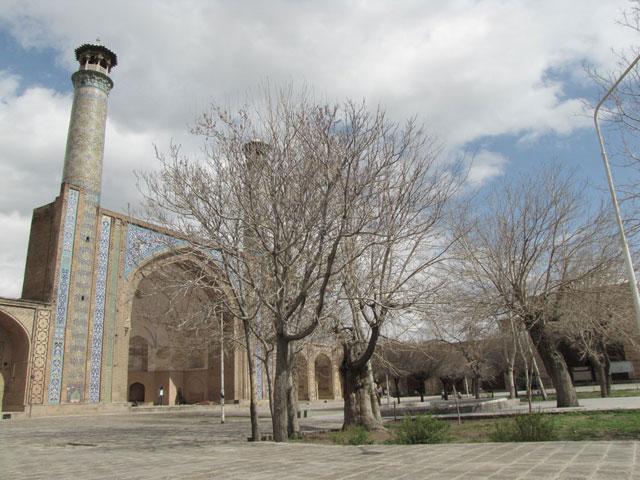