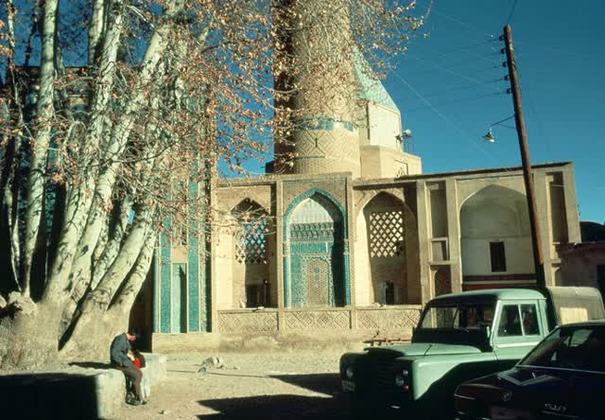 Share
The Great Mosque of Natanz is located on a site occupied since the Buyid period (tenth/fourth century AH). In the fourteenth/eighth century AH it took the form it does today, growing into a complex that included the tomb of a local Sufi shaykh named 'Abd al-Samad al-Isfahani, as well as a khanqah. Inscriptions on the building date the mosque to 1304-1309/704-709 AH, the tomb of Shaykh 'Abd al-Samad to 1307/707 AH, the khanqah to approximately 1316-1317/716-717 AH, and the minaret to 1325/725 AH.
General plan:
Today the mosque complex contains a four-iwan mosque, an octagonal sanctuary, a minaret, and a mosque from the 1930s fronted by a fourteenth-century khanqah portal. The organization of these structures at varying angles and on multiple floor levels reflects the difficulty with which they were inserted into the existing built context. The much-admired southern façade of colorful glazed tile, terracotta, and stucco bends slightly to bring together the four constituent structures that lie behind, creating a harmonious exterior appearance.
The four-iwan mosque and octagonal sanctuary:
The four-iwan mosque occupies the eastern part of the complex. An arched iwan-shaped portal leads through a short flight of stairs onto a long corridor that ends in the southwest corner of the mosque's courtyard. The facades of this court are two stories high and link four iwans of varying depths. Construction is of baked brick, with a coat of white plaster. Muqarnas vaults are found in the north and south iwans. Inscriptions in the iwans include the dates 704 AH (1304 CE) and 709 AH (1309 CE). Two bays at the rear of the south iwan flank the mihrab, leading to the domed octagonal sanctuary, which abuts the main façade.
On its southwestern facade, the iwan contains a mihrab and opens through its back onto an octagonal sanctuary, and on its east side to a covered prayer hall. Restoration during the 1970's revealed that this octagonal sanctuary predates the courtyard mosque and was originally a freestanding Buyid pavilion from 999/389 AH. In its original state the pavilion was open on all sides to a vaulted ambulatory supported by columns. This pavilion constitutes the earliest dated example of an octagonal form in Iran and although the form is not unusual in tomb towers in Iran, the later extant examples are closed. The openness of the Natanz pavilion evokes the earlier open canopy tomb, and with such evidence, Blair argues that this pavilion was originally built as an imamzada or shrine for a descendant of the Prophet.
The tomb:
'Abd al-Samad al-Isfahani, a shaykh of the Suharwardi Sufi order, died in Natanz in 1299. During the decade that followed, the site of his grave was developed by the vizier Zayn al-Din Mastari into what has survived to be one of the best preserved of Il-Khanid shrine complexes. The tomb tower takes the form of a domed cube. The dome itself is conical and rests on an octagonal drum. Its exterior is covered with glazed tilework while its interior is vaulted in muqarnas.
The khanqah:
The portal on the western end of the façade is the only remains of an early fourteenth century khanqah that was destroyed and replaced by a mosque in the 1930s. The portal takes the form of tall, two-story iwan with a pointed arched vault. The facade of the iwan is decorated with both glazed fired tiles and unglazed carved terracotta.
The minaret:
The minaret of the complex rises to the east of the khanqah facade. It is cylindrical in form and rises from a square base to a height of 37 meters. On the side of the minaret's base facing the facade (south) is a niche decorated with a panel inscribed with the date 725 AH (1324-1325 CE).
Sources: 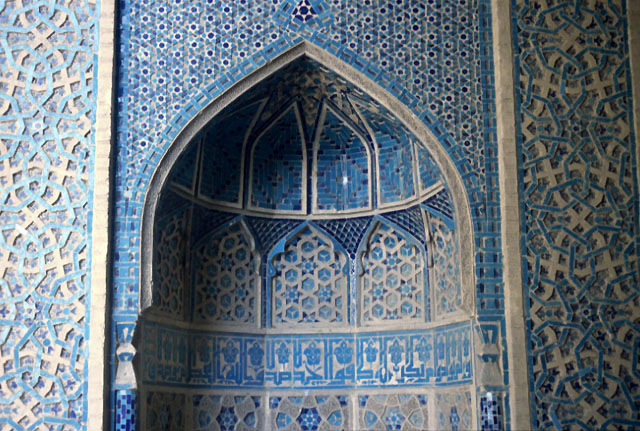