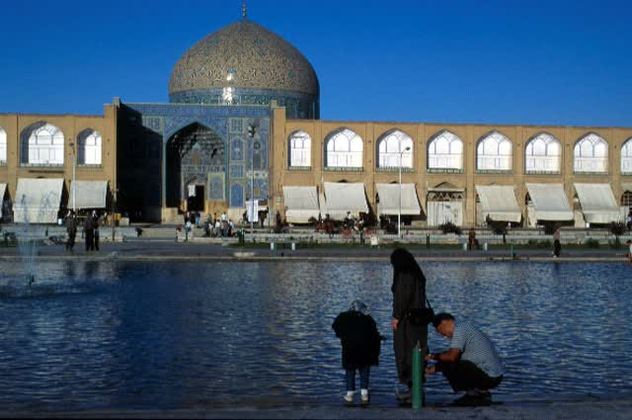 Share
The Shaykh Lutfallah mosque, built in 1617-18, is located at the center of the east side of Isfahan's maydan, or grand royal square (512 by 159 meters), built by Shah 'Abbas I between 1590 and 1602. The maydan was an expression of Isfahan's emergence as the new political and economic capital of the Safavid dynasty. It is a multifunctional space with intensive mercantile activity, which also served as a house for royal ceremonial rituals, royal caravanseri, baths, a royal mint, and a hospital-- all centered in the space of the square and the two-story arcade surrounding it on four sides. The mosque was named in 1622 after Shaykh Lutfallah Maysi al-'Amili (d.1622), a prominent religious scholar and teacher (and father-in-law to Shah 'Abbas) who came to Isfahan at the orders of Shah 'Abbas, and resided on the site, but was never involved in the mosque's construction.
The mosque is more similar in type to a mausoleum than a four-iwan mosque. Architectural historians ascribe this either to the fact that members of the Shah's family had used it for private worship or that it had functioned as a women's sanctuary.
The portal iwan is not aligned with the maydan's elevation, but is preceded by a recessed small court which flows from the maydan and is linked, on its north and south sides, to the continuous corridor that envelopes the maydan's mercantile facilities. The main entrance to the mosque is located on the east side of this small court. The structure itself is not aligned perpendicularly to the maydan's eastern wall, but lies at an angle (almost 45 degrees) against the maydan's wall. As a result, when viewed from the maydan, the mosque's main portal iwan and dome do not fall on the same axis, as is always the case in other mosques, but instead the dome appears behind the main portal iwan as if having slid 6.5 meters to the right from its axis. This asymmetrical layout was initially introduced to reconcile the (southwest) direction of Mecca with the placement of the mihrab on the qibla wall, and adds visual complexity to the structure.
Contrary to the maydan's sand-colored brick elevation, the portal iwan is elaborately ornamented in colorful mosaics. It is built as a recessed area on the eastern wall of the court, an elevated platform raised by four steps from the court level. An inscription band in white on a dark blue background runs horizontally on the three sides of the portal niche, above which begins the iwan's vault, comprising four clusters of muqarnases made of small glazed-tiles units. These four clusters ascend to inscribe a concentric floral medallion. The pointed-arch doorway is located below the inscription band and is flanked by two panels of mosaics of floral arabesques with motifs in yellow, white, and blue on a dark blue background. These panels rest on top of a continuous marble dado.
The offset entry does not allow the visitor to enter the prayer chamber directly from the maydan by passing through the main portal iwan, which is aligned on the east-west axis. Due to the mosque's alignment on the northeast-southwest axis, upon entering the mosque one walks along two corridors, oriented respectively to the northeast and southeast, which are placed adjacent to the northwest and northeast walls of the prayer chamber. Turning southwest to face the qibla wall, one enters the domed chamber to see the mihrab on the opposite wall. This journey into gradual deepening into darkness and reemergence into a room bathed with light reflected on the glazed revetment is one of the most rewarding experiences of the building.
In contrast to the grand size of the maydan's space, the Shaykh Lutfallah mosque is very small and is comprised of a single domed chamber (19 meters on a side), surrounded by rooms (which possibly functioned as service areas) on its sides, and preceded by a portal iwan overlooking the maydan. The two rooms accessed from the corridor which envelopes the sanctuary dome measure 6 by 9 meters; one is found on the western side of the corridor, and the other along the far end of the eastern wall. A third room (8 by 16 meters) is located on the exterior of the southern wall of the sanctuary, and is accessed via the corridor running along the maydan wall and then turning right after the vestibule area. Although the Shaykh Lutfallah is not one rectangular structure, its masses can be measured as one rectangular area of 44 by 30 meters and an additional rectangular service area comprising approximately 152 square meters.
The dome is one of the few single-shell domes of the Safavid architecture with a structure consisting of three levels. Four squinches of pointed-arched panels, framed by an inscription band in white and blue demarcated by light blue cable moldings, ascend from the floor and support a sixteen kite-shaped shields that, in turn, support the drum, which comprises sixteen arched panels. The drum is ornamented with alternating double-grilles windows with an arabesque pattern. The interior dome has a sunburst from which descend medallions inscribing floral motifs, which become larger as they descend away from the center. The exterior of the dome is ornamented with an arabesque of a floral motif in white, blue, and black against a yellow background.
The Shaykh Lutfallah mosque is viewed by historians and visitors as one of the most important architectural projects built on Isfahan's maydan, prominent for its location, scale, design, and ornament.
Sources:
Blair, Sheila S. and Jonathan M. Bloom. The Art and Architecture of Islam. New Haven: Yale University Press, 1994. 185-188.
Blunt, Wilfrid. Isfahan: Pearl of Asia. London: Elek Books, 1966. 74-77.
Hoag, John D. Islamic architecture. Milano: Electa Architecture; [S.l.]: Distributed by Phaidon Press, 2004, c. 1973. 171.
Michell, George. Architecture of the Islamic World. London: Thames and Hudson, 1978. 254. 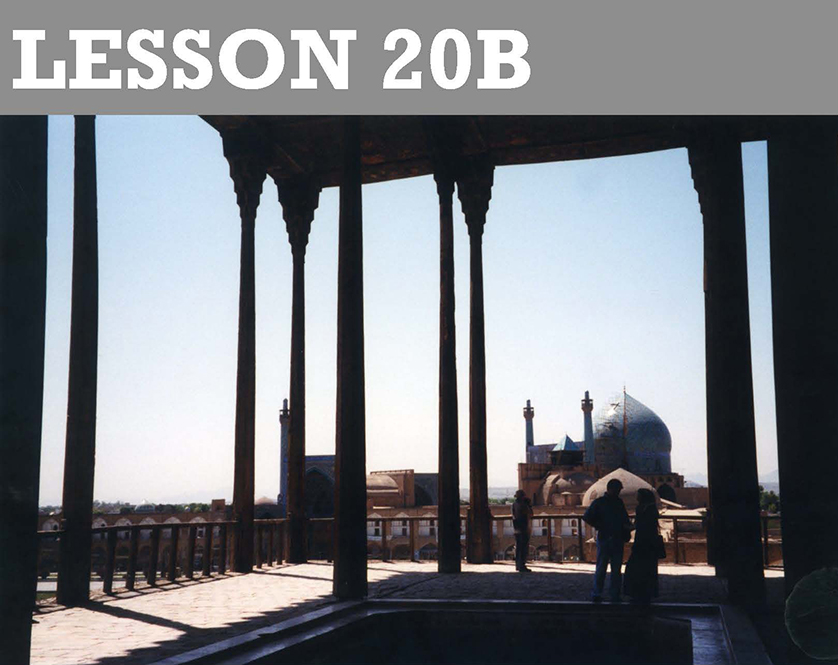 The twentieth lesson (part 2 of 2) in a 22 lesson course on Monuments of Islamic Architecture developed by Professors Gulru Necipoglu and David Roxburgh at the Aga Khan Program for Islamic Architecture at Harvard University. This lesson explores the architectural and social formation of Safavid Isfahan that was shaped by the political and economic aims of Shah ʿAbbas and his successors and the sociopolitical reorganization shared in the alliances and competitions among vested groups. This included a royal monopoly in the silk trade, and their Armenian and European facilitators, as well as the “capitalist” ventures of the new mercantile communities that engaged in long‐distance trade.