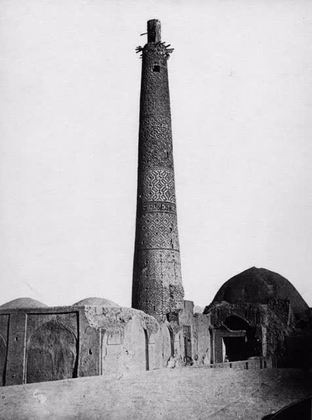 Share
The Friday mosque of Damghan is located in the northeast corner of the city. While its original construction date is estimated to be eleventh century or earlier, it was replaced by a newer structure in the Qajar period under Mirza Mohammadkhan Sepahsalar. A Seljuk minaret, still extant and original, remains on the site; it was built ca. 1058.
The mosque is oriented north-south and is centered on a large rectangular courtyard measuring twenty-eight by thirty-six meters. It is entered from a wide corridor that opens onto the northern corner of the courtyard. The southwestern (qibla) side of the courtyard is occupied by three large iwans. The larger, central iwan, flanked by two smaller iwans on either side, is seven meters wide and sixteen meters wide. Two vaulted prayer halls enclose the courtyard.
The old Seljuk minaret is located in the northeast corner of the mosque, rising from a base adjoining the entrance corridor. Its diameter at the base is nearly fourteen meters, which shrinks to seven meters at its top. The minaret reaches nearly twenty-seven meters in height. Decorated with recessed bricks in highly original geometric patterns, the minaret displays all the characteristics of eleventh-century art found in other Damghan monuments. Although originally freestanding, the minaret is now attached to the building. It contains one hundred and five steps. Its (now-ruined) brick balcony is supported by a projecting ring of muqarnas and is decorated with a chapter from the Quran. A Kufic inscription plate further ornaments the minaret. The glazed tile work on the minaret is one of the earliest examples still preserved in Iran.
Sources:
Ḥājjī-Qāsimī, Kāmbīz, ed. Ganjnāmah-i farhang-i ās̲ār-i miʻmārī-i Islāmī-i Īrān. Vol. 7, 122-127 [English text: 74-79]. Tehran: Dānishgāh-i Shahīd Bihishtī, 1996.
Hatim, Ghulam Ali.  Mimari-i Islami-i Iran dar dawrah-i Saljuqiyan, 52. Tehran: Muassasah-i Intisharat-i Jihad-i Danishgahi (Majid), 2000. 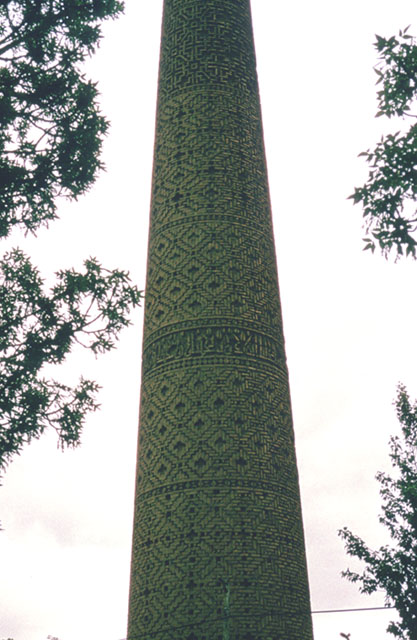