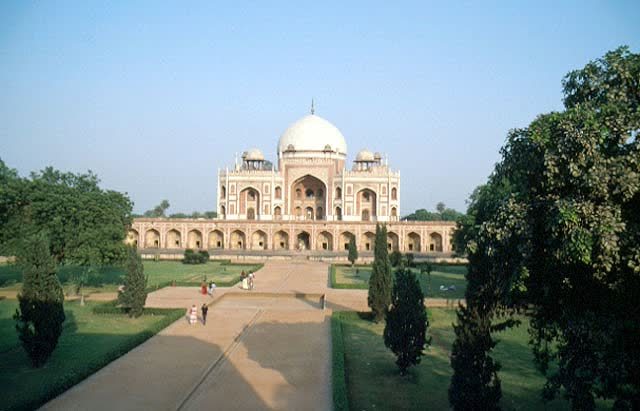 Share
Humayun's tomb is known as the first example of the monumental scale that would characterize subsequent Mughal imperial architecture. Commissioned, it is believed, by Humayun's senior widow and principal wife, Haji Begam, or by her son Akbar, the tomb is the first to mark the grave of a Mughal emperor; Humayun's father Babur, who founded the dynasty, had requested out of piety that he be buried in a garden. Humayun's Tomb is now one of the best-preserved Mughal monuments in Delhi.

The tomb design is attributed to Sayyid Muhammad and his father, Mirak Sayyid Ghiyath (Mirak Mirza Ghiyas), Persian architects and poets active in the Timurid and later the Mughal courts. The tomb is situated south of the Purana Qila, on the eastern edge of Delhi. It is set in the center of a garden in the classical Mughal char bagh pattern. A high wall surrounds the garden on three sides, the fourth side being bounded by what was once the bank of the river Jamna, which has since been diverted. The garden is divided into four parts by two bisecting water channels with paved walkways (khiyabans), which terminate at two gates: a main one in the southern wall, and a smaller one in the western wall.

The tomb sits at the center of a plinth, about 21 feet (7m) high. The top of its central dome reaches 140 feet from the ground. The dome is double-layered; the outer layer supports the white marble exterior facing, while the inner one defines the cavernous interior volume. The rest of the tomb is clad in red sandstone, with white marble ornamentation.

A large iwan, a high arch, punctuates the center of each facade, and is set back slightly. Together with the other arches and openings, this effect creates a varied and complex impression of depth at each facade. Detailed ornamentation in three colors of stone adds to the richness to the surfaces. The plan of the main tomb building is intricate. It is a square 'ninefold plan', where eight two-storyed vaulted chambers radiate from the central, double-height domed chamber. The chambers of each level are interconnected by straight and diagonal passages. In Humayun's tomb, each of the main chambers has in turn eight more, smaller chambers radiating from it. The symmetrical ground plan contains 124 vaulted chambers in all.

The sarcophagus of Humayun is found in the central domed chamber, the head pointing south, and facing east according to Islamic practice. The vaulted chambers also contain sarcophagi that were added later. The sex of each occupant is marked by a simple carved symbol: a box of writing instruments indicates a male, and a writing slate indicates a female. The sarcophagi are not otherwise inscribed, but among them are known to be those containing the wives of Humayun, and several later Mughal emperors and princes.

Although the architect of the tomb was 'imported' from Persia, it has been observed that the distinctly Indian aspects of the tomb, such as the Hindu chattris (domed pavilions) that surround the central dome, set Humayun's tomb firmly in the Indo-Islamic tradition that was already emerging at the time. Many of the tomb's basic elements, such as the octagonal plans and high iwans, are derived from earlier tombs built for Delhi sultans. The unprecedented scale and grandeur of the monument, however, are aspects that were to define much of subsequent Mughal tomb building, and are among the similarities commonly cited between Humayun's tomb and the Taj Mahal in Agra. 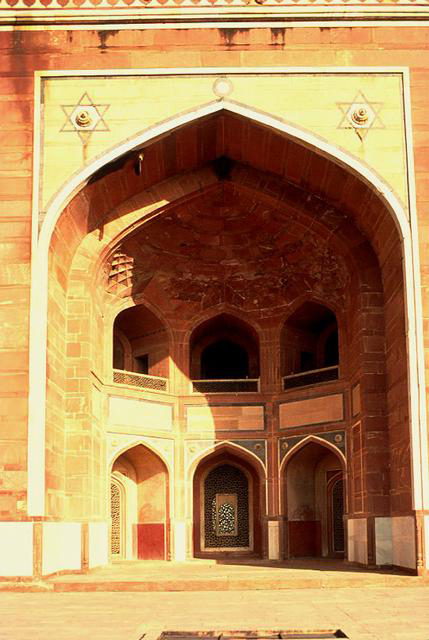