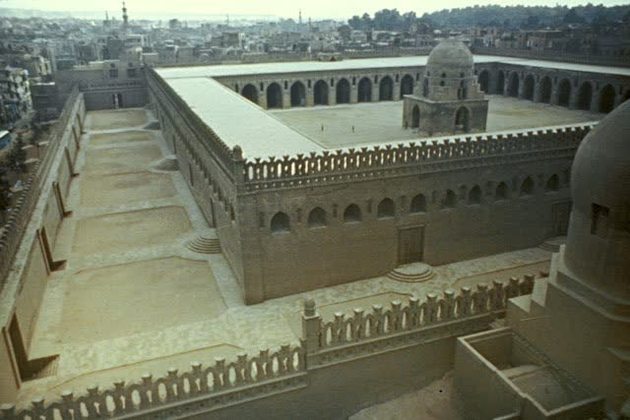 Share
This mosque was built for Ahmad ibn Tulun, son of a Turkish slave of the Abbasid caliph al-Ma'mun. He was sent to Egypt in 868 as governor of al-Fustat, but within two years he had been made governor of the whole country. Shortly thereafter, by refusing to send the annual tribute to the Abbasid court, he established himself as an independent ruler of the province. His family ruled in Egypt for 135 years, until 905. Ibn Tulun founded a new royal city on an outcrop of rock called Jabal Yashkur near the Muqattam range to the northeast of al-Fustat, razing the Christian and Jewish cemetery that was located on the hill to do so. This was a site to which many legends were attached: it was believed that Noah's ark had landed here after the flood, and that here God had spoken to Moses and Moses had confronted Pharaoh's magicians; nearby, on Qal'at al-Kabsh, Abraham had been ready to sacrifice his son to God. The city that Ahmad ibn Tulun built was called al-Qata'i', 'the wards,' descriptive of the allotments in which each group of his followers settled. In 905, when the Abbasids reestablished control, the city was destroyed and plowed under. Of its magnificence and scale all that survives is the mosque that formed its center. The mosque served as the new congregational mosque, replacing the Mosque of 'Amr, which was too small to accommodate the troops of Ibn Tulun.

Directly from his palace, or Dar al-Imara, which once stood adjoining the mosque on the qibla side, Ibn Tulun could enter the sanctuary via a door to the right of the minbar. This mosque was used for Fatimid ceremonies during the month of Ramadan. It was damaged when used as a shelter for pilgrims from North Africa to the Hijaz in the 12th c., but restored and refounded with madrasa-type functions by 'Alam al-Din Sanjar al-Dawadar at the behest of Mamluk Sultan Lajin in 1296. (Lajin had been one of the accomplices in the assassination of Sultan al-Ashraf Khalil ibn Qalawun, and while hiding in the deserted mosque, he vowed to restore it should he escape.)

The mosque is a rare architectural expression of the cultural hegemony of Samarra, Ibn Tulun's home. It is built entirely of well-fired red brick faced in carved stucco; it has ziyadas and a roof supported by arcades on piers.

The present off-center, spiral stone minaret with a mabkhara finial (the ribbed helmet carried on an open octagonal structure) is a rebuilding by Sultan Lajin of 1296.

The ablution fountain and dome were built on the site of the fawwara or fountain built by Ibn Tulun and destroyed by fire in 986. The fawwara, whose function was purely decorative, was housed in a pavilion comprising a dome carried on gilded marble columns. The original ablution facilities and a clinic were housed in the ziyada for hygienic reasons.

What remains of the roof of the room behind the mihrab is supported by wooden corbels, a local version of similar elements found in many buildings in North Africa and al-Andalus. The Andalusian influence is also manifested in the use of double-arched, horseshoe windows on the shaft of the minaret, in the entrance to the minaret's staircase, comprising a horse-shoe arch with a rectangular molded frame, and in the stone corbels supporting the cornice from which the tunnel vault carrying the bridge between the roof of the mosque and the minaret springs. This influence is accounted for by the resettlement in Egypt of Andalusian Muslim refugees who were driven out of their homeland by the Christian Reconquista (1212-60).

Since its renovation in 1999 little remains of the original plaster work, the courtyard has been paved and the fountain refaced in black marble.

See also the site record for the 2005 restoration of the mosque. 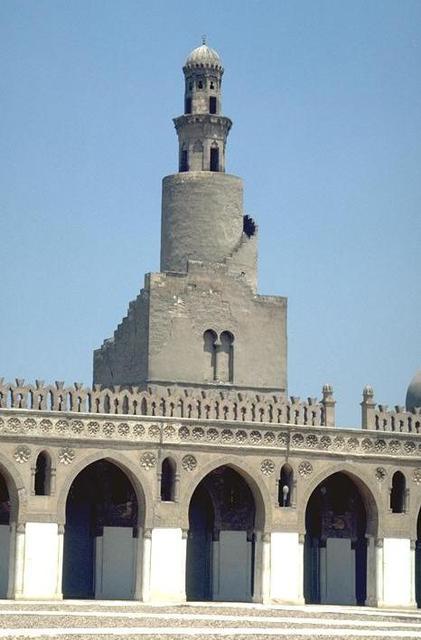