Following a decade-long revitalisation efforts undertaken by the Aga Khan Trust for Culture, which included the conservation of monuments, restoration of parks and gardens and related socio-economic projects in neighbouring districts, the Humayun’s Tomb Complex now receives almost two million visitors annually, over 500,000 of them are school children. A greater number of pilgrims – from across the world and of many faiths – visit the adjoining Dargah of Hazrat Nizamuddin Auliya, the 14th century Sufi saint who continues to be revered seven centuries after his death.

A state-of-the-art site museum is to be built at the entrance of the World Heritage Site to: enhance visitor experience; allow a better understanding of Mughal architecture and building craft traditions; shed light on the development of the Nizamuddin area over a millennium; and, most significantly, explain the pluralist Sufi cultural traditions that defined Hindustani culture for at least five centuries. This will be the first of the Site Museums planned for the 25 Adarsh or “model” monuments recently designated by the Government of India’s Ministry of Culture.

Situating the Museum at the entrance zone of the Sundar Nursery and Humayun’s Tomb Complex, just off Mathura Road and Lodhi Road, allows vehicular access on an otherwise narrow access path. The architecture of the Museum has been inspired by the tradition of geometric forms in Mughal architecture. The gallery spaces are arranged in a sequence of intersecting squares, with wide column spans of eight meters. Given the high volume of visitors expected at the site, the public circulation sequence has also been developed along a primary axis, spanning the entire length of the Museum. Natural light, filtered through skylights and open courtyards, illuminates the gallery areas. These courtyards are critical aspects of the gallery, enabling curated displays of Mughal architecture, including façade treatments, landscape elements and ornamental traditions. Complex engineering systems required for a modern museum are woven around each gallery through dedicated service corridors, thus facilitating optimal curatorial and management protocols.

The entry plaza, comprising multiple ticket counters, public amenities and a cafe, as well as access to a souvenir shop, an auditorium, library, crafts gallery and seminar rooms, is sensitively arranged under the foliage of large trees. A two-storied structure that defines the northern end of the plaza is built on the footprint and height of the existing structure. Its facade is clad with red sandstone. The plaza also functions as a threshold from which visitors can orient themselves, familiarising themselves with the many features of the area.

To enter the Museum galleries, visitors descend down a wide ramped garden, walk through an enclosed entry gallery, and arrive into the Vestibule Gallery at a depth of six meters below ground level. This gallery gives visitors a choice of visiting the “Model room” – showcasing the entire site as it would have been at the end of the Mughal reign – before entering the permanent gallery.

The landscape – both at ground level around the complex as well as at its lower level – is designed to function as a series of generously proportioned walkways, gardens and plazas that offer a pleasant experience for families, small groups and school parties. Each space benefits from the shade, shelter and visual interest offered by the many fine mature trees found on the site.

Each of the three main access courts is designed to exhibit a distinct landscape character. The principal entry court is a sunken garden in the shade of a large existing tree; the exit to Sundar Nursery has a traditional water-cascade as its dominant feature, making a symbolic connection with the central axis of the Sunder Nursery; and, the main approach to Humayun’s Tomb is a wide, impressive pathway gently inclined along a grass slope set within the length of a large linear court.

The intent of landscape design is to illustrate and interpret the rich traditions of design and planting associated with gardens of the Mughal period. The extensive roof of the sunken block of the Museum – just a few steps above the surrounding garden – is imagined as the contemporary interpretation of a garden carpet design, mostly in sandstone. The conventional features of such a garden in the Persian style – a central water channel, planting beds, and narrow runnels for irrigation – are represented as very simple patterns in the paving, and as thin shallow channels incised into the surface and suitably sloped for rain water run-off. 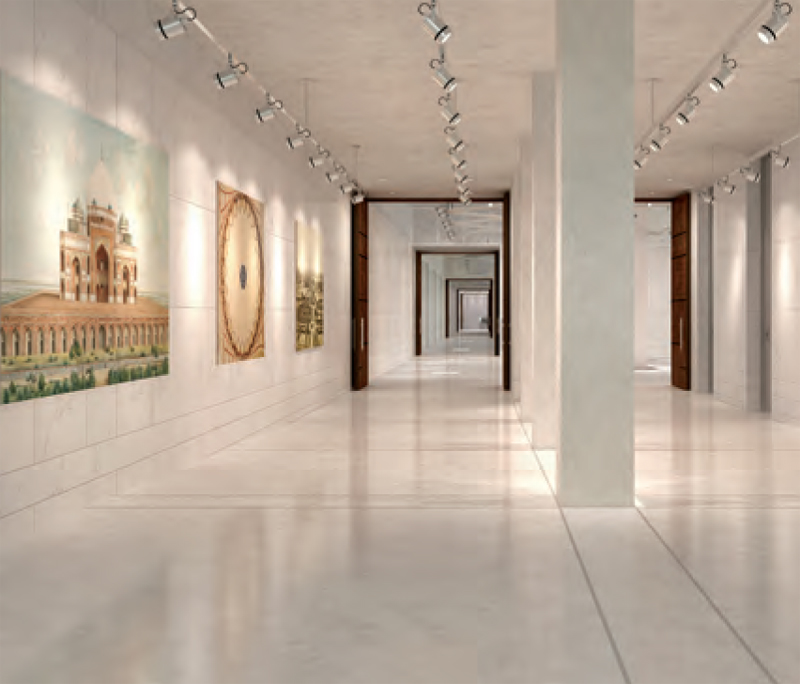