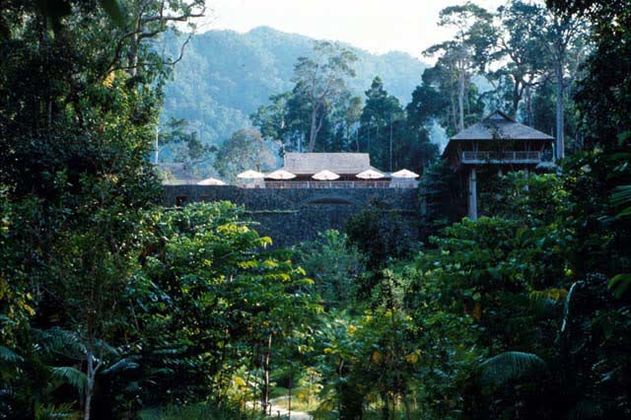 Share
Recipient of the Aga Khan Award for Architecture in 2001.
Jalan Teluka Datai is a five-star resort hotel in Pulau Langkawi, Malaysia, situated on a ridge within a lush rainforest near the sea. The hotel contains 124 guest modules, arranged as rooms within blocks of accommodation and as free-standing villas. The design of the resort is extremely sensitive to the fragile environment in which it is set, and demonstrates how a fairly large intervention can be built within a tropical rainforest which allows nature to reclaim the terrain after construction. The buildings themselves are fine examples of a synthesis between traditional forms and materials and the rigour of modern architecture.

The hotel contains 84 rooms and 40 villas totalling 124 guest modules. The buildings are of varying scales according to their location on the site. The bulkiest element is the guest-room accommodation, located on the ridge and broken up into four large blocks connected by walkways. The various restaurants and other facilities, such as the spa and beachside changing rooms, are housed in medium-sized buildings, configured as pavilions so that they are transparent and their bulk and impact on the site are minimized. The smallest buildings are the villas, which are individual units on the scale of small houses, located on the lower slopes of the site between the ridge and the beach.

A typical room is 56 square metres in area, with independent access via a detached open walkway. Accessing the rooms through individual walkways creates a great sense of privacy. The walkways are architectural elements in themselves and are open on each side to admit generous shafts of light, again creating a sense of transparency and blurring the boundaries between inside and outside.

The public areas of the hotel sit on the ridge overlooking a plaza created by the swimming-pool deck. This clearing in the forest is the heart of the resort and is exquisitely designed with water features, natural vegetation and paved connections to the various functions. Below the decks is enclosed accommodation arranged over a number of levels, according to the slope of the site, and housing indoor services such as the health club and gym. 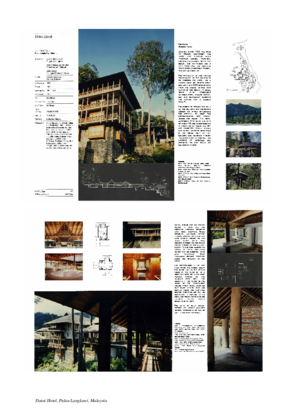