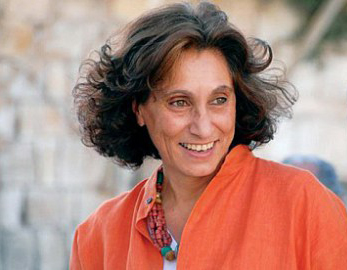 Suad Amiry (سعاد أميري) (b. 1951) is a Palestinian writer and architect living in the West Bank town of Ramallah. She studied architecture at the American University of Beirut, the University of Michigan, and the University of Edinburgh, Scotland. Her parents went from Palestine to Amman, Jordan. She was brought up there and went to Lebanon's capital of Beirut to study architecture. Her book, Sharon and My Mother-in-Law, has been translated into 19 languages, the last one in Arabic, was a bestseller in France.  The book was awarded in 2004 the prestigious Viareggio Prize in Italy.

From 1991 to 1993 Amiry was a member of a Palestinian peace delegation in Washington D.C. She is engaged in some major peace initiatives of Palestinian and Israeli women. She is Director and founder of the Riwaq Centre for Architectural Conservation, the center was founded in 1991; the first of its kind to work on the rehabilitation and protection of architectural heritage in Palestine. Amiry was a member of staff at Birzeit University until 1991, since then she has worked for Riwaq where she is the director. Riwaq received the Aga Khan Award for Architecture in 2013 for the Revitalisation of Birzeit Historic Centre. She was appointed as a vice-chairperson of the Board of Trustees of Birzeit University in 2006.

Amiry lives in Ramallah with her husband, the academic and political activist Salim Tamari.