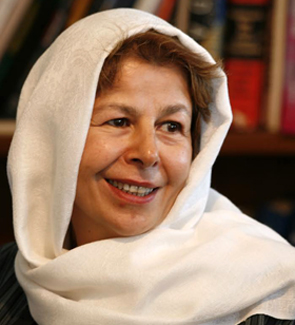 Faryar Javaherian is an Iranian architect and curator, born in Mashhad, Khorassan, raised in , and educated in the . She studied at the of at Austin, MIT and Harvard and is the founder of Gamma Consultants, recognised as the leading office in museum and Persian garden design in . Her buildings have been widely published in Iranian architectural magazines and her work is established as having a recognisable Iranian-Modern style. Her major built works include the Iranian Calligraphers Society Complex and Gardens (1995 – 1997), the  (2005 – 2006), and the Aghdassieh Apartment Complex (2007) among many others. Most recently, Ms. Javaherian has won a competition to build the new   in ; she is also working on five museum projects. In addition to her built work, Ms. Javaherian has curated numerous exhibitions that cover the fields of architecture, landscape, photography and cinema. She has worked as an art director and set decorator for ten films including Hamoon and The Pear Tree, which are cult films in Iranian cinema. Ms. Javaherian is the author of Gardens of : Ancient Wisdom, New Visions (2004), Thirty Years of Solitude (2007), and numerous articles in the journal Memar, to which she contributes as an editor. Ms. Javaherian has lectured extensively in  and at the universities of  and , and was a participant in the Aga Khan Award for Architecture’s international seminar on industrial architecture held in  in 2009. She has served as jury member for the Memar Grand Prize and other international competitions.