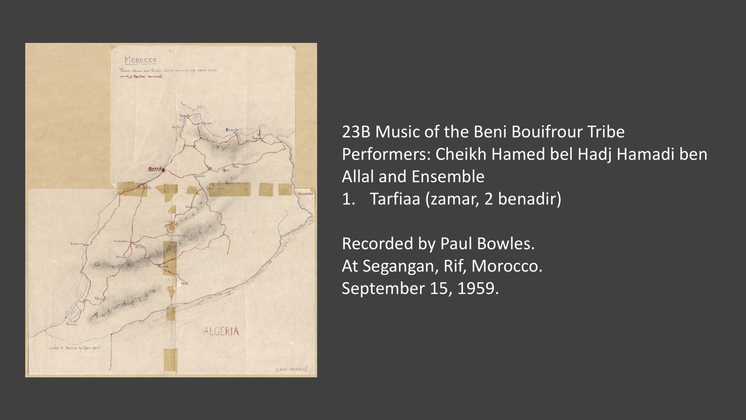 ”This group would accept no signal for starting; they also had a propensity for stopping a piece in the middle of the phrase, on a completely arbitrary signal from the Cheikh. This behavior of his left me mystified. I never knew when the music was going to start or stop, nor, it appeared, did the musicians. The cheikh seemed to derive a strange pleasure from his high-handed assertion of authority, although it made no musical sense whatsoever.

The bendir in northern Morocco  is an instrument I could do without. The membrane is loose and thus has a heavy reverberant sound; this is augmented by a wire stretched across its surface from one side of the room to the other, so that what is heard is a dull buzz when it is struck. This sound is appreciated and sought after; it makes for auditory confusion and recordings; unhappily also the bendir players are usually the singers, so that there is no way of reducing the noise of the drums without losing the voices entirely. In the South the membranes are tight and not wired, so that the sound is high and clean. (Compare the benadir of the Haha and Tafraout Tribes with those of the Beni Bouifrour and the Beni Ouriaghel.) In Einzoren I sent the bendir players out to build a fire and heat their membranes, but it did no good.

The very brief sequence which I have labeled ”Impromptu Dance” is a recording of a little jam-session the musicians had got into while we were being served tea.  When the performers became aware that they were being watched and recorded, they put an end to it.”