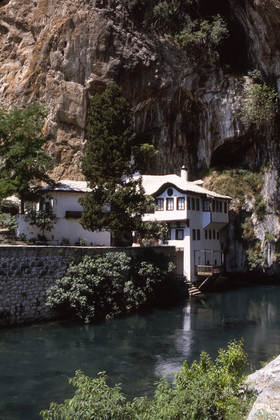 The village of Blagaj na Buni is located southeast of Mostar in the Neretva Canton of Herzegovina. The Buna River emerges from under the massive karst stone formation after traveling over 19 kilometers underground. Archaeological finds indicate that the area has been inhabited for over 5,000 years. The present tekija (dervish monastic complex) dates back over 300 years. The karst formation extends high above the tekija to sites where ruins of fortresses occupied by Illyrians, Romans, and medieval rulers are located.1

Ottoman rule in Blagaj began in 1466/870 AH, and the tekke was likely established not long after that, and not later than ca. 1520/926 AH. The earliest known reference to the tekke is in the Seyâhatnâme, or Travelogue, of Evliya Çelebi, who passed through Blagaj in 1664. The site included the tekke, a turbe (tomb) with two graves, and a musafirhana, where visiting dervishes and other travelers could obtain free overnight lodging. The musafirhana and turbe still stand, though the tekke building was damaged by a falling rock around 1881, and its ruins stood until sometime in the 20th century.

The musafirhana consists of a basement, ground floor, and upper floor. Exterior and interior walls of the building are plastered and painted white, and the timber construction and woodwork on the doors and windows, staircase, and ceilings of the rooms are painted with brown oil paint. The floors are wooden, except for areas of the ground and first floors that are made of stone.

The first restoration of the tekke was carried out in 1851 in a "Turkish Baroque", and the musafirhana is one of the few buildings in Bosnia and Herzegovina that retains features from baroque influence on Ottoman architecture. In 1952 the National Institute for the Protection of Cultural Monuments of NR BiH began a restoration of the musafirhana and the turbe, intended to restore them as fully as possible to their original condition.

Sometime in the 1950s, the dervishes were expelled from the tekija, and the site has since been used as a tourist facility and cafe. The building suffered minor damage in 1993 during the Bosnian War which was repaired once the war ended. In 2012, another restoration project was carried out by the Turkish travel agency Fidan Tours to further restore the site to its original condition.

Bosnia and Herzegovina Commission to Preserve National Monuments. "Decision on Designation of Properties as National Monuments: Tekke in Blagaj on the Buna, the natural and architectural ensemble." Accessed October 20, 2015. http://kons.gov.ba/main.php?id_struct=50&lang=4&action=view&id=1867.