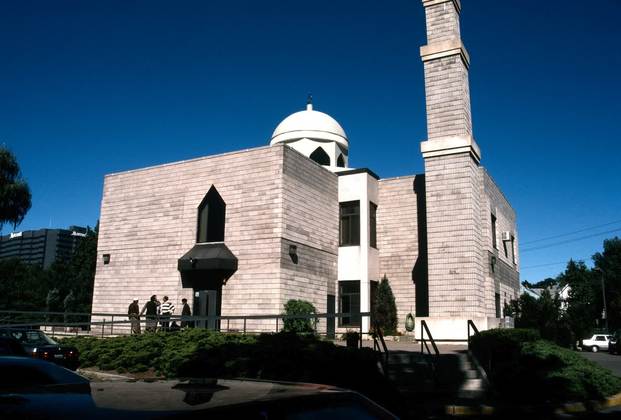 Share
Dar-ul-Islah was established by Bergen County Muslims in the 1970s. In the early years, the community met in the youth hall of St. Anastasia's Roman Catholic Church. In the 1980s, they purchased a plot of land with a house on a dead end gravel street to serve as the site of a permanent mosque. The mosque was constructed by Molinari Stubaus Architects from 1984-1986, and the minaret was completed in 1988.
The original mosque building is two stories, with a tan and brown fluted concrete exterior. It has a central dome and a 70-foot-high minaret, both visible from the nearby New Jersey Turnpike. The building is cross-shaped in plan, with a square prayer hall at the center of the cross, and classrooms, offices, funeral space, and ablution areas in each of the side wings.
In 2008, Dar-ul-Islah began an expansion project to add two storys of additional space for classrooms and a multipurpose room. In 2009, the house adjacent to the mosque became available and was purchased by Dar-ul-Islah, providing additional room for expansion. New plans were drawn up by Heritage Architecture of Paramus (NJ), nearly doubling the size of the mosque. Work began on the larger expansion in November 2010, and remained partially incomplete as of 2014.
Sources:
Dar-ul-Islah. "About Darul Islah." Accessed April 1, 2015. http://www.darulislah.org/du/?page_id=15.
Dar-ul-Islah. "Expansion." Accessed April 1, 2015. http://www.darulislah.org/?page_id=11.
Khalidi, Omar. Mosques in the United States of America and Canada, 10. Berlin: US Embassy Germany, [ca. 2006]. http://archnet.org/publications/9968.
Pollack, Michael. "Mosque Sees Growth in Its Future." New York Times, June 30, 1991. Accessed April 1, 2015. http://www.nytimes.com/1991/06/30/nyregion/teaneck-journal-mosque-sees-growth-in-its-future.html.