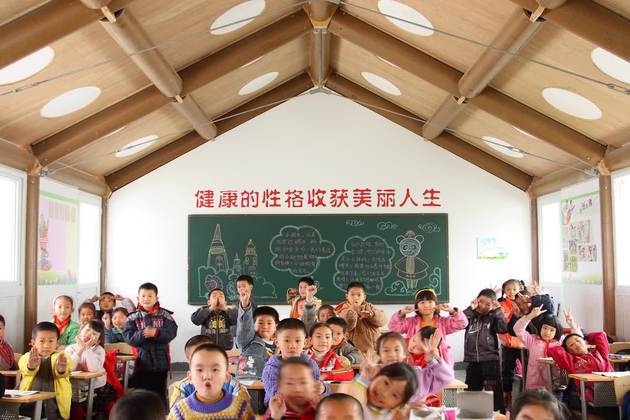 Share
The programme called for the construction of nine 6 x 9-metre temporary classrooms in a two-month period for an elementary school damaged by the 2008 earthquake. The architect further constrained the project by resolving to use only locally available construction materials and to reduce both the number and variety of the parts. Paper tubes and wooden joints were employed to assemble the base structure for three 6 x 30-metre buildings in long, row-house style on the foundation of the destroyed structures. The pitched roofing is polycarbonate with plywood panels, while a post-and-beam structure provides awnings. Each structure accommodates three classrooms. Assembled by university students and volunteers, they are still being used today.
The classrooms were designed with paper tubes which are inexpensive, recyclable, reusable, and readily available. Paper tubes were combined with wooden joints to become the main structure of the building, and by applying simple construction methods the temporary school was completed on September 11th, 2008. Construction was done by 120 volunteers consisting of 30 Japanese students, 50 Chinese students and a group of local teachers, all of which were non professional construction workers. Not only was there lack of common language, the difference in their cultural background was a struggle for the volunteers of two countries to work within the short time constraints. But by sharing the same experience though day and night, the volunteers deepened mutual their understanding and achieved their goal, completing construction of the 3 buildings in just 40 days. The children were called back to start learning in their new classrooms on the same day of the opening. Hualin elementary school was the first educational facility to be reconstructed, also the fastest and only realized paper tube building in China at that time.
Source: Aga Khan Award for Architecture