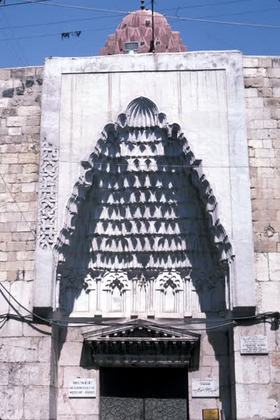 Share
The Bimaristan of Nur al-Din, also known as Bimaristan al-Nuri, is a historic hospital and medical school situated in the old city of Damascus, southwest of the Great Mosque. It was built in two phases. The Zangid sultan Nur al-Din Mahmud ibn Zangi erected the main building in 1154/548 AH. An extension was added in 1242 by a doctor named Badr al-Din. The extension allowed the hospital to serve a larger number of patients without compromising the building's original form. The hospital was used until the beginning of the 20th century when it was replaced by the modern University Hospital.
The original structure of the hospital is still intact, revealing Seljuk architectural designs in terms of its plan, form and ornamental elements. In essence, it is a courtyard building with an elaborate entrance block. The entrance is located on the western side of the building, where an ornate entrance portal opens onto the street. The portal is made of two large wooden doors wrapped in a layer of copper fitted to the wood with brass nails arranged in a geometric pattern. Surmounting the doorway is an antique pediment reused from a local pre-Islamic building. Surmounting this is a large muqarnas hood set within a rectangular frame outlined with a geometric pattern, only part of which still exists.
The gate leads into a square chamber (measuring 5 sq meters). On the north and south sides, apse-like spaces flank the chamber, the one on the south leading onto a set of rooms. On the east side, a second gateway leads onto the building's central courtyard via an iwan. This entrance room is ornamented with an inscription band that indicates the great deeds of the Mamluk era across the four walls. Surmounting it is an elaborate, high muqarnas vault with apertures admitting light into the space. The shell of this vault is visible on the exterior of the building.
Passing through the gateway on the east side of the entrance chamber leads through an iwan opening onto the building's central interior courtyard, measuring 20m x 15m. A rectangular pool measuring 7m x 8.5m occupies the center of the courtyard. The courtyard is framed on all sides with an iwan flanked by two chambers. These chambers are capped with intersecting vaults. The southern iwan with its marble veneer has a mihrab that is decorated with organic forms. The largest iwan is the eastern one, opposite the entrance block (8m x 7.5m), it was used for the doctors' meetings and lectures. The iwan has two storage spaces encased within the walls that were discovered during a later renovation. They were built-in bookcases that contained many medical books that Nur al-Din had donated to the bimaristan.
Sources:

Rihawi, Abdul Qader. Arabic Islamic Architecture: Its Characteristics and Traces in Syria. Damascus: Publications of the Ministry of Culture and National Leadership, 1979.
Ernst Herzfeld represented the architecture of the Bimaristan in plans, elevations and sections of the building, as well as in drawings of the muqarnas domes and other decorative elements that can be seen among the Herfeld Papers of the Metropolitan Museum in New York.