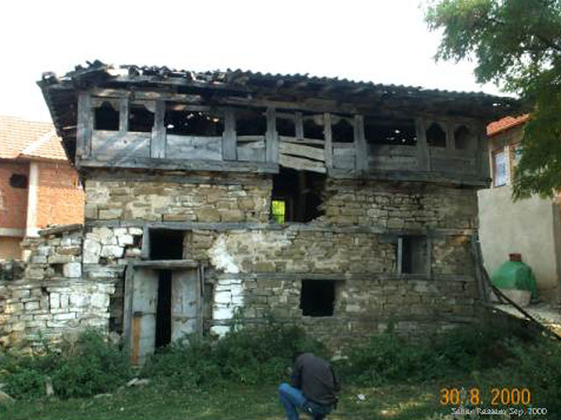 In preparing my exhibition, Burned Books and Blasted Shrines: Cultural Heritage under Fire in Kosovo, I took my little packet of burned books up to the paper conservators at the Straus Center for Conservation, on the top floor of Harvard's Fogg Art Museum. I watched as the conservator picked out these small bits of charcoal -- the carbonized fragments of manuscripts and old books. They were hard and black, some had shiny surfaces that reflected the afternoon sunlight. Looking closely, one could distinguish: smooth, blackened fragments of leather bindings; loose fibers or carbonized pieces of woven cloth from the inside of the spines of books; chunks of charcoal in which one could still see the fused layers of pages; still smaller fragments of burned paper; black charcoal dust. One larger piece, softer and grayish in color, not completely turned to carbon, was still recognizable as a book: the remains of a spine, or perhaps the fore-edge of a volume, less than an inch wide and perhaps 2-3 inches long, with the curled edges of charred pages still visible on the narrow ends. It had come from the burned-out interior of a 15th-century mosque in Pec.

In my office, I keep a copy of a poem, an elegy for the burned Sarajevo library by a Bosnian poet, which talks about the removal of tons of such clinkers from the ruins of Bosnia's burned out National Library. In Prishtina the National Library still stands, but an estimated half of all the books in public libraries in Kosovo -- nearly a million books -- were destroyed in 1998-99. It brings home the vulnerability of the human knowledge that institutions such as universities and libraries are established to cultivate and preserve. We like to believe that we can be keepers of the records of civilization and we do our best to preserve them from fires and floods and other natural calamities. But what can one do to keep books and human beings safe from those who would destroy them?