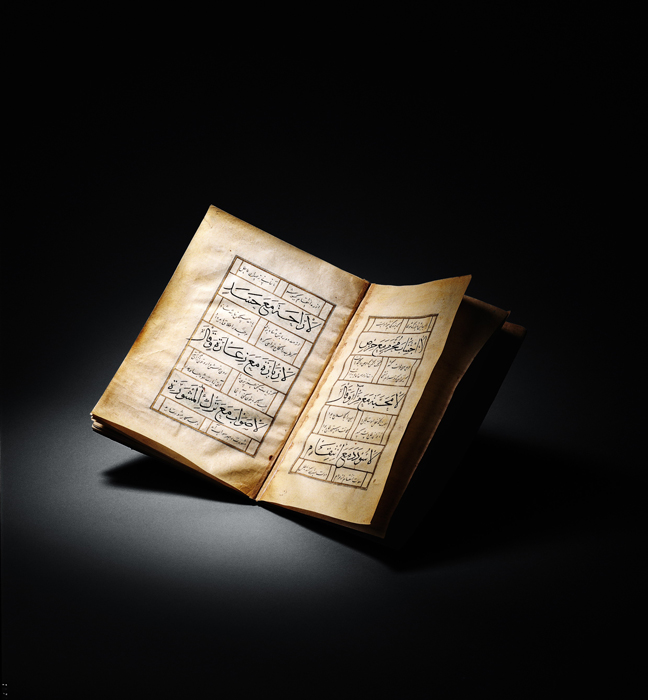 This manuscript contains a compilation of one hundred short maxims attributed to the first Shia imam, 'Ali ibn Abi Talib, all accompanied by an anonymous Persian translation rendered in quatrain form (Makariou 2007, p. 158, n. 1). The first page of this nineteen-folio volume is decorated with an illuminated frontispiece containing the basmallah and introducing the text. The succession of Arab maxims and their Persian translations are executed in different scripts and at differently sized fonts, creating a visual rhythm that subdivides the surface of each page. This fragmented organization mirrors the similar nature of the text, the development of which is simultaneously two-fold (first in Arabic, then in Persian) and discontinued (the succession of words). The Persian quatrain is disposed in two separate panels that meet the first hemistich of each verse at left and the second of each at right. The reader’s eye thus moves beyond the manuscript’s central fold and follows the same line to read the complete bayt (distich). The use of a central caesura in the middle of the verse and the separate columns that result respond here to the rhythmic structure of Persian poetry; the bayt, composed of two hemistiches, constitutes a semantic unity, and the hemistich contains the metre of the poem and serves as its rhythmic measure. The end of the metre coincides with the end of a hemistich, necessitating a pause in diction, which materializes the central caesura. If the type of presentation in panels juxtaposed with the alternating scripts is adapted to the translated texts or commentaries, it is equally acceptable in the fifteenth-century Iranian world for copying Qur’anic texts, giving scribes the opportunity to demonstrate their mastery of different types of calligraphy. In this copy of one hundred maxims, the calligrapher has used an elegant tawqi script, which figures among the six canonical scripts (aqlam al-sitta). For the Persian text, the scribe has chosen nasta'liq (ibid., n. 3). The ensemble is written on parchment and paper, which is unusual as parchment was no longer - or only rarely - used in the Islamic world after the eleventh century. Born in Herat, Mahmud Haravi entered the service of the Qaraqoyyunlu prince Pir Budaq around 1458 CE, at the time governor of Shiraz and a great bibliophile (ibid., n. 4). The prince’s desire for autonomy soon paid off due to an open conflict with his father Jahanshah, one that was rapidly settled and which resulted in the compensatory nomination of Pir Budaq to be governor of Baghdad in 1460 CE. Haravi followed Pir Budaq to Baghdad and stayed there most likely until the death of his patron in 1466 CE. He ended his career at the court of the Aqqoyunlu sultan Ya'qub (r. 883-96 H/1478-90 CE) (ibid., n. 5).