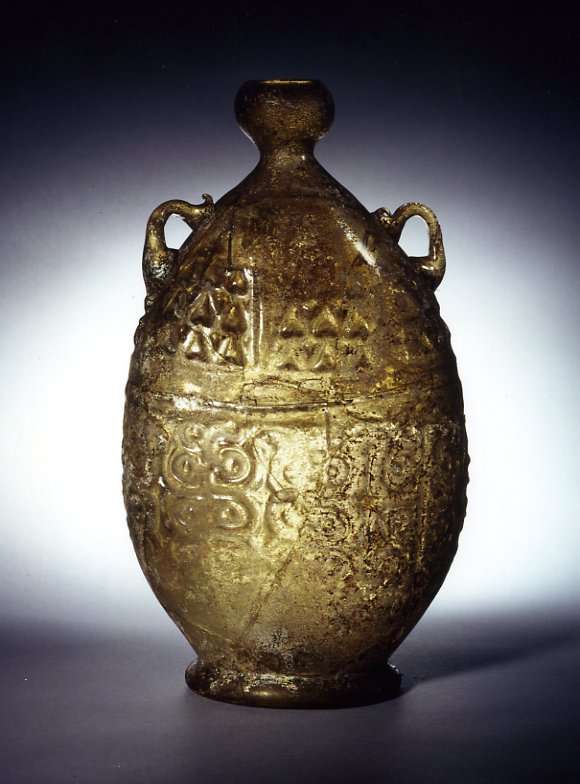 This unusual honey-yellowish coloured mould-blown glass bottle has two main panels of decoration featuring an omphalos pattern, palmettes, and concentric heart or chevron-shaped forms. There are two small loop handles applied to the shoulder. Mould blowing was a Roman technique that was later adapted by glassmakers across the mediaeval Islamic world. The steps involved in the production of mould blown glass begin with the creation of a mould (in bronze, terracotta, or clay) with the final object’s decoration in reverse on the interior of the mould. Next, the glassmaker introduces a glass gob (parison) on the blowpipe into the mould and inflates the glass until it reaches the recesses of the mould’s pattern. Once taken from the mould, the object is re-blown (so-called optic blowing), manipulated, transferred to the pontil, and finished. Thus, although mould blowing has been described as a cost-effective, simple procedure in comparison to cut decoration, it was actually an involved process that required skill and creativity (see Carboni 2001, p. 197 for a complete discussion of this technique). No full-size metal moulds for Islamic ceramics are known to exist from the mediaeval period, but two metal dip moulds do survive (Carboni and Whitehouse 2001, pp. 84-85, nos. 10-11). The present bottle was probably produced using a two-part mould that would have been initially fastened together and then reopened after the glassmaker blew the parison inside the mould to impress the mould’s pattern; then the design would be finalised outside the mould. In shape, this object bears a small amount of resemblance to a series of much smaller one-handled pear-shaped bottles attributed to the Mesopotamian region in the ninth century. The omphalos and leaf patterns, on the other hand, can be found on glass bottles of varying colours that have been attributed to the Iranian lands between the tenth and twelfth centuries (see Carboni 2001, pp. 210-229, cat. 53a, 59, and 62).