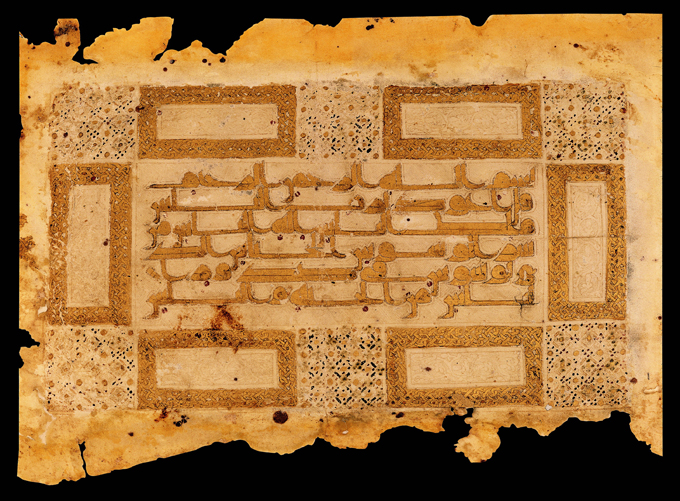 This folio is the last page of a Qur’an on oblong-format parchment. It is very richly illuminated: the final sura, which is very short, comprising just six verses, is copied here in gilded letters bordered by a line of brown ink. Some vowel diacritics are marked in red ink, but otherwise no diacritical marks are given. Some spelling irregularities can be noted, including in particular the absence of the alif to indicate a long “a” vowel, as in the second word on the fourth line: al-waswasi (the tempter). There are also instances of words being truncated, either at the start or at the end, and of words being split between two lines: this is the case with the ya of al-ladhi, at the start of line five, and also with the article of the word al-nas, where the alif is located at the end of the fifth line (with a golden rectangle added next to it to fill the space left empty as a result). The six lines of text give the impression of a continuous block and the words appear to have been linked together; on the third line, for example, the calligrapher has disproportionately extended the horizontal line of the letter kaf (third letter) through to the alifof the following word; they are separated only by two ink lines. This impression is further accentuated by the fact that the end of the verses is not indicated. The sura is inscribed within a wide border with alternating squares, formed of a scattering of coloured dots arranged around golden circles, and rectangles with woven, gilded borders. A central vignette, almost erased, can be seen on the left margin. This tripartite composition is frequently repeated in the illuminated double folios marking the major divisions of the text. In these folios the largest, central area - occupied here by the written text - displays a geometric or plant design. The page reproducing Sura al-Falaq (The Dawn), previously opposite this page, was very probably handled in a similar way, the two folios together forming the finispiece - end page - of this Qur’an. This highly luxurious layout, accentuating the Qur’an’s last sura, recalls a parchment fragment found in Sana’a and dated to the first half of the eighth century. Although we cannot be certain that the whole of the text was copied in gold, this is conceivable, because the parchment has been treated with exceptional care - indeed it is difficult to tell the flesh side from the hair side, which is relatively rare in the Islamic world. The same level of care is also notable in a sumptuous manuscript calligraphed in gold and dateable to the ninth century, most of which is preserved in Istanbul. On the reverse side of the page an inscription indicates that the manuscript was given as a waqf to the Great Mosque of Kairouan (Tunisia), but does not mention either the donor or the date. Nonetheless only a wealthy individual could have commissioned a copy of this quality. This incomplete information means that we cannot be certain about the location and date of this Qur’an’s execution. However, it is easier to propose a date than a provenance: this style of calligraphy links the manuscript to the ninth century.