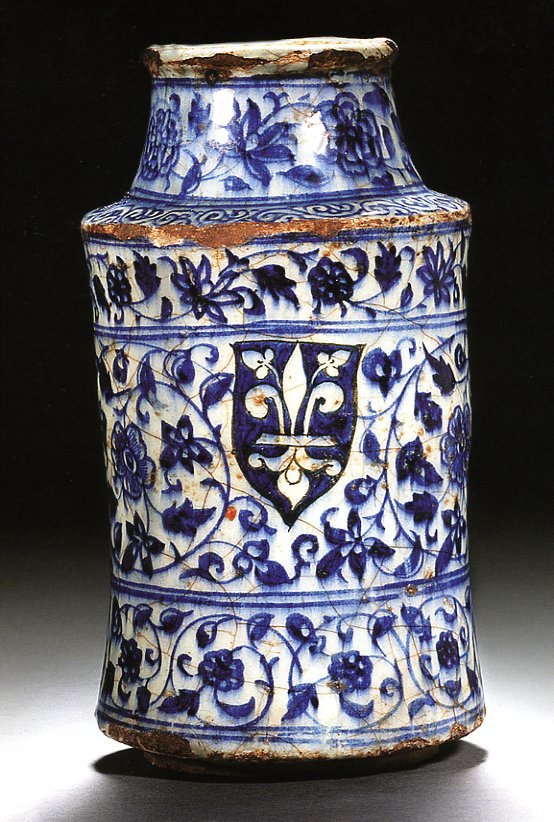 This albarello, along with a companion piece, comes from the same workshop; they both have the same size, similar concave cylindrical belly, horizontal shoulder and wide tronconical neck, ending in a thick mouth and with very similar designs painted in cobalt blue under transparent glaze. Registers of foliage, separated by horizontal double lines, cover the two vases in their entirety, mixing rosettes, lotus flowers and small bent or dentate leaves. On the central, wider register are crests with a lily flower alternating with large rolled stems, punctuated with florets and leaves, shielding a large centre flower on one of the vases, and a crane in flight on the other. This type of high, narrow cylindrical vase seems to have appeared in Iran, in the eleventh or twelfth century, before spreading around the Near East. This elegant hourglass shape profile was readily adopted from the end of the twelfth century in Syria. It is generally thought that these albarelli were used to store pharmaceutical substances or perfumes and could be exported - especially to Europe - with their contents. Various French, Spanish and Italian inventories of the fourteenth and fifteenth centuries mention ceramic items “from Damascus”. Thus, the Medici archives indicate the presence of albaregli damaschini in Florence. An albarello, housed among the collections of the Museum of Decorative Arts in Paris, presents a very similar design to this one, blending coats of arms with lily flowers and cranes in flight. The particular design of the lily flower, with its two flowery outgrowths in the upper corners, has been associated with the coat of arms of the city of Florence. It is tempting to make this attribution, but it is not entirely convincing. One could certainly imagine an “adapted” version, based on the Florentine coat of arms model, made by the eastern potter, which was more in keeping with his ornamental repertoire. Italian merchants - and those from Florence, in particular - were present in Cairo, Damascus and Beirut and it is possible that one of them could have ordered these vases for a Florentine apothecary. The lily flower nonetheless did form part of the Islamic repertoire, as a symbolic crest. Several Mamluk sultans and emirs used it until the fifteenth century. It is to be noted that, on monuments at least, the motif appeared essentially within a Syrian context. A version that is surprisingly close to our vases (but without the flowery outgrowths) can be discerned on the marble decoration of the Maristan Nuri hospital in Damascus. This is due to the embellishments effected in 1283 CE by the sultan Qala’un (who used the lily flower as a blazon), after he had been cared for in that institution. This distinctive design can be seen on gourds with moulded designs found in Syria and probably dating back to the end of the thirteenth or fourteenth century. It would be tempting to assume that there is a link between these albarelli and the highly respected Nuri hospital, which was still very reputable in the fifteenth century. A jar bearing a blazon with a lily flower design, though a very different design, possibly of the fourteenth century, bears an inscription which indicated that it had been made by the same Maristan Nuri and supposedly contained a waterlily-based preparation. However, the shield-like shape of the blazon is not frequently found among the coats of arms of the Mamluks who used a medallion that was either circular or almond-shaped. It can be seen, however, on Mamluk incrusted metal objects intended for the European market, sometimes left white for the purchaser to engrave later his coat of arms thereon. Moreover, these albarelli were part of a blue and white design production, with borrowed Chinese references, which developed in Syria, but also in Egypt, probably from the end of the fourteenth century on, under the influence of mostly imported Yuan porcelain. The Syrian production is exemplified in a small blue and white plant-decorated bowl, kept in the Musee du Louvre, Paris, which bears on its underside “Made in Damascus”. Fragments with plant motifs that are fairly comparable to the decoration on these two vases were found in that same city, near Bab al-Sharqi, where potters’ workshops were located in mediaeval times. The Fustat excavations also unearthed a significant number of blue and white fragments, sometimes with the addition of black, often bearing signatures of potters. This sort of blue and white Chinese-type decoration is also often seen on wall tiles in Syria, Egypt and Anatolia, taken from monuments dated between 1425 CE and the end of the fifteenth century, which help to establish a date for this production.