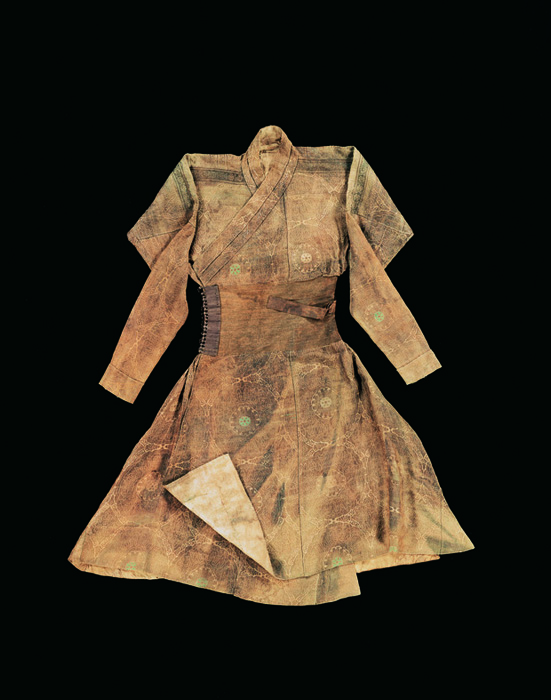 This robe, with its fitted waist, but also the flared hips and tiny-button closure is a remarkable example of luxury clothing of the mid-Islamic period. Its long sleeves and fastening on the right evoke numerous comparisons with drawings on the scattered pages of Mongol-period manuscripts. The sleeves extend beyond the length of the arms and, thus, were worn pleated. This detail invariably appears on the pages of Il-Khanid manuscripts, whether from the pages of the great Mongol Shahnama, now dismembered, or from the “Albums Diez” or illustrations from the Universal History by Rashid al-Din, among others. This long-sleeved robe is an undergarment, always worn beneath a coat with sleeves covering the shoulders only, knotted on the right with ribbons. The model is likely to have its roots in China. It appears in Yuan works (Yuan was an older, allied dynasty of the Il-Khans), especially on a mandala done on a kesi (silk tapestry) on which Emperor Yuan Togha Temur (1328–1332 CE) and his brother Khoshila were represented (Makariou 2007, p. 55, n. 75). Very rarely was it depicted without an overcoat; this is how it features in mourning scenes, but also on a page of the great Mongol Shahnama housed in the Louvre (ibid., notes 76-77). This is, no doubt, a ceremonial garment (ibid., n. 78). The complex weave of the fabric - seemingly a lampas - assigns this piece to a set itself subdivided into several sub-sets but which mediaeval European inventories all refer to as panni tartarici. These luxurious fabrics were documented between 1295 CE (London, St. Paul’s Cathedral) and 1380 CE (inventory of Charles V). Unfortunately, the inventories are sparing in details which still makes it difficult to assign a piece to a specific manufacturing centre. This robe fits into the medallion decoration group. These textiles with compartmentalized decoration appear in inventories between 1311 CE (inventory of Pope Clement V) and 1361 CE (inventory of the Vatican). However, it differs on a number of points. First, the usual figurative decoration is missing in this set; secondly, there is a pseudo-inscription around the large lobed circles. A six-petal rosette is woven into the centre of these wheels in a contrasting greyish-green thread. The pseudo-inscription could indicate an origin from the Iranian coast or Islamic Central Asia, which should be confirmed with a technical analysis. The panni tartarici are kept among the treasures of Western churches, but this is the only model which has retained its original cut. A short coat was discovered in Urumqi (Xinjiang) in 1960 (ibid., n. 79). The arrival of these fabrics among civil and religious treasures had an impact on Italian Gothic silk designs (ibid., n. 80). This garment, therefore, speaks of Chinese influence on the Islamic world and the fertile influence of the latter on the beginnings of luxury fabric manufacture in Europe, particularly in Lucca.