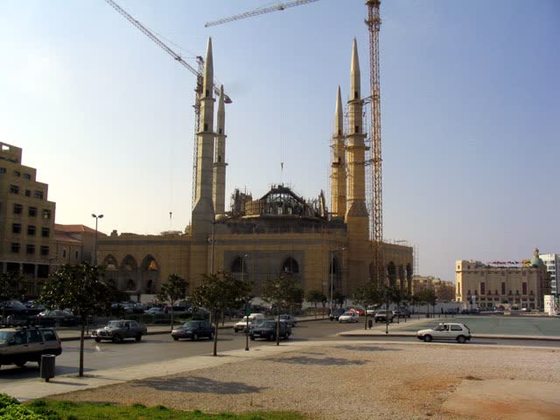 The Mohammad al-Amine Mosque is located on the corner adjacent to the St. George Maronite Cathedral with a prime opening onto Martyr’s Square. By 1933, and according to the earliest document provided by Dar Al Fatwa, the Sunni Waqf already owned parts of the future Mosque’s plot and was defined as a Zawiya. Since the turn of the century several of Beirut’s prominent Sunni families banded to form an organization that raised funds and donations to sponsor the construction of a mosque, but their plans would never materialize.

In 2001, Dar Al Fatwa would finally find itself in a position that would allow it to substantiate the mosque’s construction, and so Mufti Qabbani expanded the parcel of land by buying the entirety of the land plot formed after the reconstruction of the Beirut Central District by Solidere. The Lebanese Prime Minister at the time, Rafic al-Hariri, would finance the land buy as well as the construction of the entirety of the mosque. The project broke ground in 2003 and the Mohammad Al Amine Mosque was inaugurated on the 17th of October, 2008.

The Mosque’s design was inspired by the Sultan Ahmet Mosque in Istanbul, also known as the Blue Mosque. In terms of style and expression, the Mohammad Al Amine mosque adheres to the Ottoman mosque construction tradition. It has large, elevated interior spaces coupled with a heightened dome, a perforated pendentive for lighting that rests on two semi-domes, 4 slender minarets placed on the dome’s corners and large multi-story arches. The mosque is clad in what is fondly referred to by Lebanese architects as the Beiruti yellow sandstone in order to integrate it aesthetically with the Beirut City Center, although the stone itself was mined in Riyadh, Saudi Arabia and shipped to Beirut from there, the large central dome is clad in light blue tiles.

The mosque’s chief patron, Rafic al-Hariri, was assassinated on February 14th, 2005. His body was laid to rest within the mosque until his mausoleum, directly adjacent to the mosque, was completed and opened in 2015.