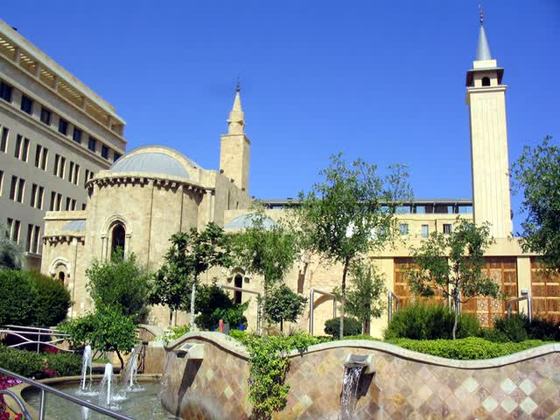 Following the end of the Lebanese Civil War in 1991, the Great Omari Mosque, the central mosque of Lebanon’s Sunni community, was in ruins as it had been shelled, burned and looted heavily throughout the 15-year conflict.

In 1994, plans to renovate and expand the mosque were beginning to materialize as the company tasked with the reconstruction of the Beirut Central District Solidere, had begun to take form. Initially, Dar al-Fatwa, the principal Sunni religious authority presided over by Mufti Mohammad Rashid Kabbani at the time, had very specific plans to expand the mosque by demolishing the original 800-year old structure and constructing a new, larger structure instead but lacked the funds to do so. One of Solidere’s largest shareholders, and the owner of Bank Audi (Lebanon’s largest bank) Raymond Audi proposed to renovate the mosque as is while adding a humble, context-aware extension.

Audi’s proposal was favored by Solidere, as well as Kuwaiti businesswoman Shaikha Suad Hamad al-Humaizi who agreed to help fund the restoration and expansion in memory of her parents. Audi commissioned Youssef Haidar, one of Lebanon’s premier restoration and reconstruction architects for the project. The restored and expanded mosque was opened to the faithful in 2004.