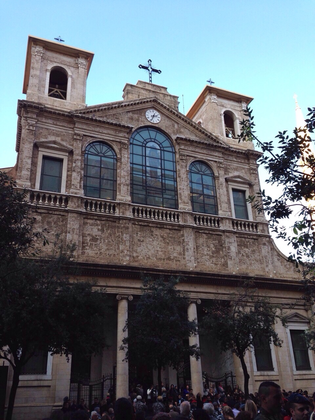 In the late 1820’s Maronites from the mountains began immigrating to Beirut in hope of better economic opportunities. By 1860 and following the civil war in Mount Lebanon, they relocated in the tens of thousands.

In 1884 the corner stone for the new Cathedral was laid out on top of an earlier Maronite church that had been constructed in 1753 to serve the tiny community at the time, but with the rapid population shift from the mountains to the city, the earlier church found itself unable to properly accommodate the faithful as their numbers increased, fortifying the demand to construct a new, enlarged and more appropriate structure. On Palm Sunday in 1894, the St. George Maronite Cathedral of Beirut was consecrated. It was the largest congregational and religious structure in the city at the time, its design inspired by and conceived from the Basilica di Santa Maria Maggiore in Rome.

The Cathedral was designed by Giuseppe Maggiore and was constructed by Monsignor Youssef El-Debs, the Maronite Archbishop of Beirut. The Cathedral’s resemblance to its Roman counterpart is striking; the division of the main façade, the interior use of Ionic columns to delineate the accessory sides from the main nave, the gold-encrusted cobbled roof and the meticulously carved altar are all evocative of Santa Maria Maggiore. The Cathedral’s construction used age-old columns removed from the Phoenician-Roman temple ruins in the Deir El Qalaa monastery in Beit Meri, 10 miles up the mountain, and incorporated them in the structure of the Cathedral.

The Cathedral was bombarded heavily during the Lebanese Civil War, restoration works commenced in 1997 and were completed in April 2000. In 2010, construction started on a new campanile adjacent to the church which was to rise to 72 meters, matching the height of the minarets of the Mohammad al-Amine mosque next door. The new bell tower was completed in 2016.