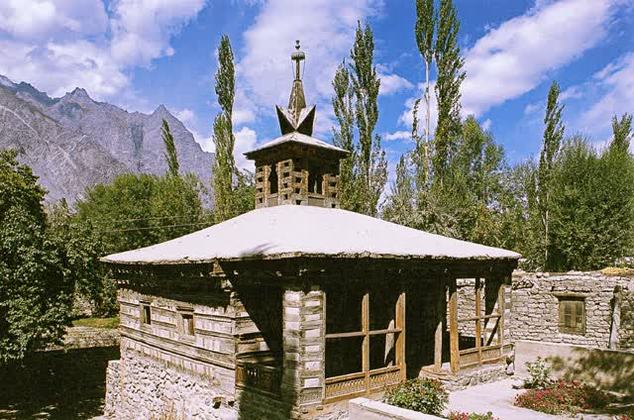 The 14th century Amburiq Mosque represents the first Islamic religious monument in the Shigar Valley built by Iranian craftsmen who were travelling with the Kashmiri preacher, Syed Ali Hamdani. The Mosque which is richly adorned with carved motifs has strong structural elements using the traditional ‘cribbage and cator’ technique,.

Before restoration, the mosque suffered severe deterioration over time, with its central tower destroyed and the mosque having developed unstability as it was affected by leaning. Prior to physical work, intensive documentation created a thorough understanding of the building’s structure and informed the subsequent conservation work. The conservation plan emphasized on using locally-available materials and artisans trained in previous restoration activities in other parts of Gilgit-Baltistan. Furthermore, the implementation plan stressed on protection of as much historic building fabric as possible through the primary use of indigenous materials and crafts and through use of  supplementary modern preservation techniques. This effort has helped to restore the authentic Tibetan and Kashmiri architecture prevalent in the region in that time. The mosque and its courtyard have been returned to their original use with a provision of its new ablution and washing space annexe. Similarly a small museum has also been established in the mosque premises, giving renewed life, to one of the region’s oldest historically and socially significant structures.

The total covered area of the Mosque is 63m². Building restoration was started in April 1998 and was completed in August 2000. Of the total restoration cost of US$ 18'300, Royal Norwegian Embassy, Islamabad provided US$ 16'250, while the remaining amount was contributed by the local community. Aga Khan Cultural Services-Pakistan provided technical assistance and oversight of the project. The project won the Award of Merit in the UNESCO Asia-Pacific Heritage Awards of 2005.