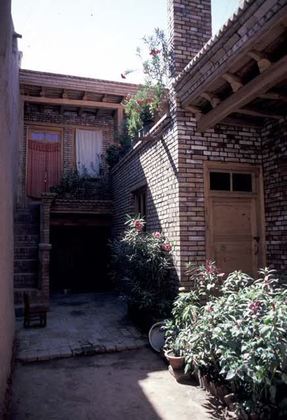 Share
The older houses of Kashi are constructed of poplar timbers and mud brick, with walls as thick as sixty centimeters. The ends of the structural roof beams and vertical support pillars are often exposed through the mud brick. The houses have no more than two stories and are often built with a basement. The flat roofs, often shaded by pergolas, serve as extra storage space.

Unlike their plain exterior, the courtyards of Kashi houses are often richly decorated with woodcarvings on eaves, balconies and verandahs. There is often an earthen or stone bench next to the front entrance. Inside, the rooms are equipped with shelving niches carved into the mud brick walls, which are sometimes enhanced by floral and geometric motifs worked into plaster. They are lit by skylights and usually contain a raised sitting or sleeping platform (kang), below which a cavity is left for heating. Some rooms share a fireplace on a common wall. Often the receiving room is on the second story where it may be complimented with a carved wooden balcony looking into the courtyard.