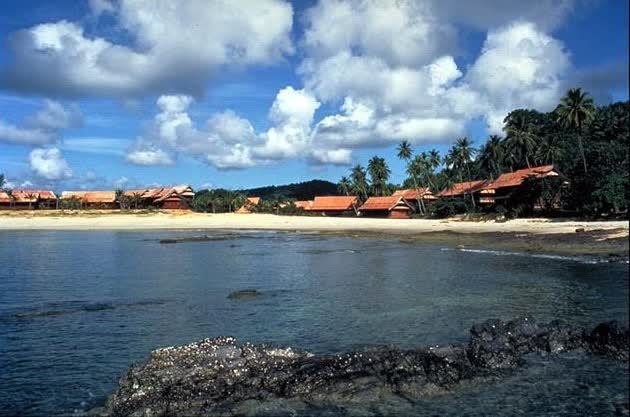 Share
Recipient of the Aga Khan Award for Architecture in 1983.
This project, consisting of a hotel and a nearby visitor centre located in an area that is among the world's few remaining hatcheries for giant leather-back and green turtles, was conceived and developed by the Malaysian government. The hotel, spread over a 31 hectare site around a crescent-shaped beach, is modelled after istanas, wooden palaces of great beauty and dignity built by the earlier sultans of east coast Malaysia. This indigenous building form is appropriate for a low-rise hotel and well adapted to the climate. Two-storey hardwood units are elevated 60 to 150 centimetres above ground for flood protection and air circulation. Other natural cooling and ventilating devices are open-sided rooms, lattice soffits, steep pitched roofs with gable grilles and bisque roof tiles left exposed on the inside, allowing the interior to breathe and warm air to escape through the roof. The visitor centre also consists of indigenous hardwood buildings on stilts. Conceived as a conservation area and a sea life museum, it incorporates a botanical garden, a crafts bazaar and eleven private cottage suites arranged in traditional Malaysian village style. The jury found that although "architecturally the adaptation of traditional forms to new uses raises several technical and ideological problems, the consistency and seriousness with which this approach has been pursued at all levels of design and execution has generated an architecture which is in keeping with traditional values and aesthetics, and of an excellence which matches the best surviving traditional examples."