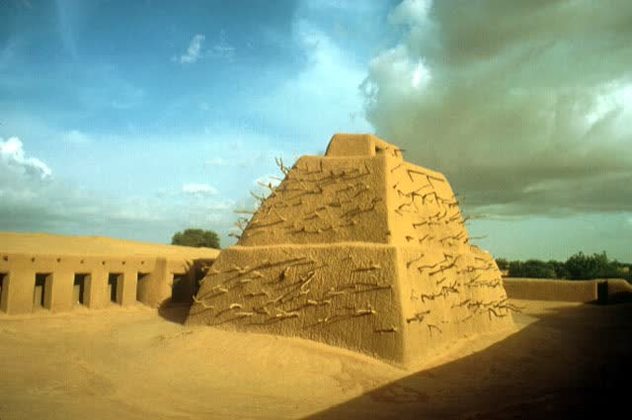 Share
The Tomb of Askia in the town of Gao, Mali marks Islamic architecture in sub-Saharan West Africa's beginning. It is situated in one of the flourishing cities of the Sudanese caravan route. Located near the Niger River, the city of Gao became the capital city of the Songhay (Songhai) Empire upon its founding in 1493 by Askia Mohammed. The Songhay people had already converted to Islam by the twelfth century as attested to inscribed tombstones in kufic script that can be found around the tomb. However, not until Askia Mohammed was appointed Caliph of the lands of the Tekrour in 1497 was Islam confirmed the official religion. Askia Mohammed attested to an increased orthodoxy by building mosques and inviting Muslim scholars to Gao, while expanding the Songhay Empire into Mali, Niger and Nigeria. After his death in 1529 he was supposedly interred in the tomb, which is the largest historic architectural monument in West Africa and in local memory Askia lives on as an important mythological hero.

The Tomb of Askia is the central commanding feature of the Great Mosque of Gao. This layout pays homage to the Saharan tradition of prominent ancestral tumuli or tomb mounds erected over graves that date to before 1,000 BC. This large feature was incorporated into a new mosque building tradition in which the mosque itself becomes a combination of tomb, minaret and sacred enclosure.

The tomb itself is built of mudbrick on an almost square plan measuring about 14 by 18 meters. The four faces are aligned according to cardinal direction, as are the outer walls of the mosque. The earthen tomb rises from its base as a stepped pyramidal tower articulated by three distinct levels to a height of just over ten meters. The earthen exterior walls taper inwards upon ascent and are distinguished by many protruding toron, or stakes, of acacia wood. Such stakes bristling from the walls, which provide a permanent scaffolding for replastering the mud that has washed away, are said to be characteristic of the work of Manding masons, whose skills Askia forcibly engaged in his building program. When contrasted with other mosques displaying the more common straight and linear toron, such as at the Djenné Great Mosque, these stakes give the Tomb of Askia a wild appearance.

The tomb is enclosed within the eight-foot wall of the larger mosque complex the area of which is about 45 by 50 meters. Like the tomb inside it, the complex is aligned with the cardinal directions (a feature particular to Sudanese mosques in that the qibla faces due east and not northeast towards Mecca). A sanctuary also eight feet high lines the inside of the east wall of the enclosure. This sanctuary is comprised of four bays of arcades delineated by 69 closely spaced square pillars in four rows supporting a flat roof. The interior of the sanctuary is very dark except for the light from the apertures into the courtyard. The middle of the easternmost wall of the sanctuary is punctured by a double-niched mihrab, a unique feature of West African Islamic architecture. The second niche, to the right, houses a small podium and signifies a minbar. As the presence of a minbar refers to a politically endowed imam, or a qadi, this feature reveals the orthodox Maliki doctrine in the Songhay Empire. Another notable feature of this mihrab and its qibla, and particular to historic Sudanese mosques, is that it faces due east, according to the alignment of the tomb and enclosure wall, and not northeast toward Mecca. Given the quality of the earthen construction, this sanctuary was probably not built until the early nineteenth century during the period of multiple West African jihad movements.

An 1852 account by Heinrich Barth notes a decrepit tower structure to the east of the tomb, on the qibla axis. Prussian Labelle surmises that this now extant tower might have served as a mihrab tower like the one built by Askia Mohammed at Tendirma. Likely, this tower had also served as a minaret. With its deterioration it seems the mausoleum took over this function with the addition of the spiraling stairway cut into the tomb.

Barth also claimed that the tomb was comprised of seven terraces, though only three are clearly distinguishable today. His reading may be due to an interpretation of the building's levels incorporating the path of the telescopic, circumambulating stairway as creating three unique distinct levels on each of the four faces, resulting in the holy number seven. Such a reading assumes a redesign that adapted the prototype of the Songhay tumulus to visually compliment an abstract Islamic prescription, while functionally accommodating the need for a minaret. After wrapping around the outside of the tomb twice, the stairs enter into a small tunnel that opens onto a shallow terrace at the top.

The tomb is a radical departure from the prior conical articulation of the popular Songhay earthen tumulus. Furthermore, surmising on the numerology of its unique shape, Labelle Prussin claims that the mathematical articulation of the three level, four-sided pyramid, corresponded to "the traditional ancestors (who) were enveloped in the robes of Islam and magic squares." However, this style was probably borrowed from the square, three-stepped stairway minarets of the Ibadite zawiyas, or holy shrines, of the Mzab region of southern Algeria, a cultural adaptation that is made understandable by the fact that Mohammed Askia hosted numerous Ibadi scholars. Further, it must be noted that similar building evolution was happening contemporary to Askia's reign under the Fulani in the Hausaland region of northern Nigeria, such as with the Great Mosque of Kano.

Leary, A.H. 1966. The Development of Islamic Architecture in the Western Sudan. MA in African Studies dissertation. University of Birmingham, 40.