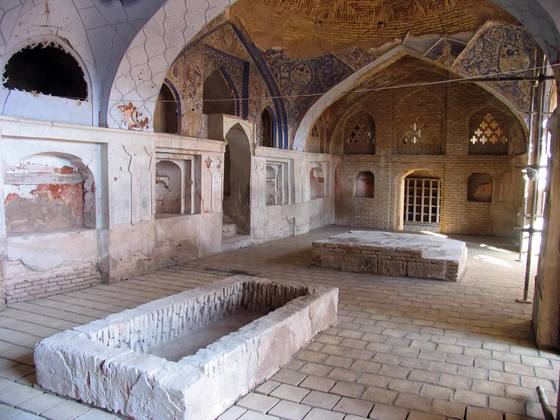 Share
Abandoned when the Jewish community left Herat, the Yu Aw synagogue in the Momandha quarter of the Old City soon fell into disrepair, and was subsequently damaged during the long conflict in the area. Dating from the turn of the century, this building follows a pattern seen in other synagogues in Herat, with a large domed central space, in the centre of which stands a raised platform or tebah. Technical support was provided by AKTC to the Department of Historic Monuments for work on the synagogue in 2007.
Initial structural repairs were made to the external walls, after which masonry arches over the first‐floor prayer area were propped, enabling removal of earth and reconstruction of the collapsed brick vaults and the main dome, which were finished with a weatherproof layer of brick paving. Damaged areas of plaster ‐ parts of which have painted decoration and had become detached from the walls ‐ were stabilized with gypsum, and cracks in the structural brickwork filled. During the course of the work, a cistern at the centre of which lies an octagonal pool was rediscovered under the level of the courtyard and restored
An important component of the social history and built heritage of Herat, the restored synagogue is now used as an educational and cultural centre for women and children from the surrounding neighborhood. As well as contributing to the development of skills among Afghan professionals and craftsmen, this project has helped to promote awareness of the richness of traditional construction and decorative techniques in the old city.
The building today houses a children's school.
Source: Aga Khan Trust for Culture