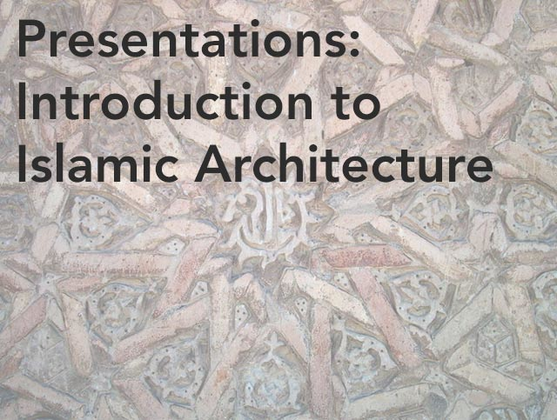 Islamic art and architecture, like any other form of art that attempts to characterize the material production of a particular faith or variety of cultures over the longue durée, cannot be seen as an autonomous artistic development. Indeed, scholars of Islamic art and architecture, over the past decade or so in particular, have demonstrated that the field is characterized by a dialogic process of development rather than an autonomous or mimetic one that depends on its Western counterpart.1 Thus, the inherent challenge to those who teach the subject is to simultaneously convey the idea that Islamic architecture is an integral part of the broader history of architecture, while maintaining the idea that the field remains distinct enough to be characterized as its own discipline.

Since Oleg Grabar’s seminal text Formation of Islamic Art (1972), which sought to come to terms with the evolving field of Islamic Art, and its conceptual disciplinary framework as it related to the broader discipline of art history, this once nascent field has grown considerably. Grabar outlined the “formation” of an Islamic art with great clarity through a variety of methods and examples by conflating elements ranging from Vienna school style formalism with Panofsky-influenced searches for meaning, as well as what were more recent studies in the revisionist social history of the 1960s. Despite some initial opposition to the book, Grabar wove a narrative that sought to explain the origins of an “Islamic” art in order not only to define it, but validate it as a legitimate field of study.2

Since this formative moment in Islamic art’s historiography it is worth bearing in mind the distinct and often oppositional directions into which the study of Islamic art has been drawn as it was taught. However, these challenges are less daunting if the diversity of these positions is considered a productive enrichment of the field, rather than a constricting hindrance. Of course teaching and studying Islamic art have their own sets of challenges that often differ, but the focus for the Pedagogy Project remains the teaching of the subject.3 Beyond the various agendas that surface within the field there are several important themes or apparent challenges that I will briefly introduce below as examples that should be considered to enable and enhance one’s approach to teaching the subject rather than as intimidating factors.

One of the first challenges in teaching Islamic art and architecture has to do with the numerous diverse languages and geographies that one encounters. These are of central importance to the study of the field and can be rather daunting. On the one hand, the regions and languages encountered can appear so disparate as to suggest completely disconnected cultures. On the other hand, there is a clear case to be made for their association, not only due to a common faith, but at times a shared artistic tradition. The themes of geography and language can also be utilized in teaching to convey the diversity inherent in Islamic art by the study of topics ranging from Chinese mosques and Hellenistic desert palaces to nineteenth-century pavilions and traditions of figurative painting. Sometimes considered exceptions to the canon of Islamic art, these examples remind us that in teaching the subject one will certainly encounter a variety of students with presuppositions.

No matter a student’s personal beliefs, or whether they have very little knowledge about Islam or its art and architecture, or art in general, students will bring a range of opinions and questions to the table. Everything from assumptions about the representation of “forbidden images” to questions based on more recent historical events such as 9/11 or the Arab Spring will surface and the instructor will suddenly find him or herself a default representative with the responsibility of explaining a group of cultures or religion and its often variegated nature and long history. Another important fact about the study of Islamic art is that not all of it was created by, or even for, Muslims. This reality allows an instructor or student a possible “way in” to the subject matter and can be an effective tool in demonstrating Islamic art’s historically global connections. Indeed, the study of Islamic art is an excellent way to access the “global” history of architecture.

It is with regard to some of these concepts above that we have begun to outline what this collection within the Archnet website seeks to do. By making specific material including lectures on a variety of related topics downloadable, the collection strives to make substantial progress in the teaching of the subject. What follows then is not the way, or only way to approach the teaching of Islamic art and architecture, but rather a way that we believe will significantly enhance how and what students learn.