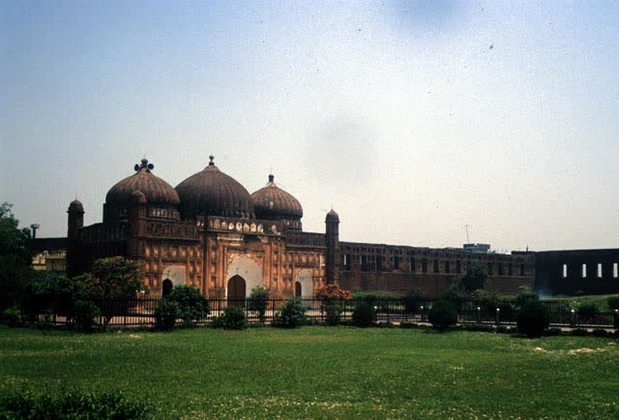 Share
The fort complex is located in the northwestern part of Dhaka on the banks of the Buriganga River. Prince Muhammad Azam, son of Emperor Awrangzib, began the construction while he was serving as the Viceroy of Bengal. Governor Nawab Shaista Khan continued the project after Prince Azam was recalled to assist his father in the war against the Marhattas. It is commonly believed that the premature death of his favorite daughter, Iran-Dukht, popularly known as Bibi Pari, caused the suspension of the project. She was betrothed to Prince Azam, and upon her death, Nawab Shaista considered it inauspicious to continue the project.

The rectangular fort encompasses an area of 1082' x 800'. Only some gateways and a long fortification wall with semi-octagonal bastions on the south side and high defense walls running along the western side remain. The two monumental gateways at the southeast and northeast ends face each other at a distance of 800'.

The southeastern gateway is a majestic structure built in the Mughal style. It was intended to be three storeys, but the upper storey was never completed. The inner facade has a four-centered archway with deep plastered semi-octagonal alcoves on either side. Short octagonal minarets define edges. The outer facade also has a four-centered archway flanked with plastered semi-octagonal alcoves. Above each alcove there is an oriel window in two stages that is capped by an elegant cupola. The central archway leads to a square domed hall with guardrooms on either side.

It appears that the defensive walls were reinforced by an internal embankment of earth along the east portion of the southwest corner. It contains an underground room, which may have been used as a summerhouse. The entrance is under a half-dome, which is decorated with ornamental plaster-cut work.

The fort complex of Lalbagh is located on the banks of the Buriganga river in the old city of Dhaka. Construction of the fort was started in 1678 AD by Prince Azam Shah, son of Emperor Aurangzeb, during his period as the Viceroy of Bengal. His successor, Shaista Khan, however never continued the construction and the fort remained incomplete. Construction is believed to have been abandoned mainly due to the death of the daughter of Shaista Khan, Iran Dukht, popularly known as Bibi Pari. She was betrothed to Prince Azam, and upon her death, Nawab Shaista considered it inauspicious to continue the project. One of the main buildings in the complex is the Tomb of Bibi Pari.

After the end of the Mughal period, the fort was abandoned and remained unoccupied for a long period of time. This period saw the loss of architectural features and structural decay of the fort complex. During 1947 – 1970, prior to the independence of Bangladesh, the fort was used as police barracks and much of the complex was built over.

The complex is now under the care of the Department of Archaeology, Government of the People’s Republic of Bangladesh. The Department has since carried out some minor conservation works at the complex and carried out excavations across the complex. Several modern structures have also been demolished to retain the architectural integrity of the complex. The Lalbagh Fort now sits in a dense urban environment surrounded by modern buildings.

Each of the Mughal dynasties has contributed significantly to the architecture of the Indian subcontinent with exemplary specimens of fortress-palaces seen across the period and the region. The Agra Fort, for instance is unsurpassed in its grandiosity and aesthetic refinement. Fatehpur Sikri, with its series of palaces, courts and vast expanse is notable for its influence on later Mughal forts and cities. Lahore Fort is considered a unique repository of Mughal architecture, with several layers and contributions by different Mughal Emperors. It embodies the artistic and aesthetic height of the Mughal style. The Red Fort at Delhi demonstrates the outstanding development of Mughal architecture and planning.

The city of Dhaka was the capital city of the Mughals until 1704, where successive governors and princely viceroys have built magnificent palaces, mosques, tombs, fortifications and sarais, often surrounded by beautifully laid out gardens and pavilions. Unfortunately, few have survived. The Lalbagh Fort is a fine example of this period of Mughal architecture in the city of Dhaka. Compared to the architectural contribution of the Mughals across northern India, Dhaka has fewer noteworthy structures. However, the Lalbagh Fort can be considered one such significant Mughal structure in the city of Dhaka.