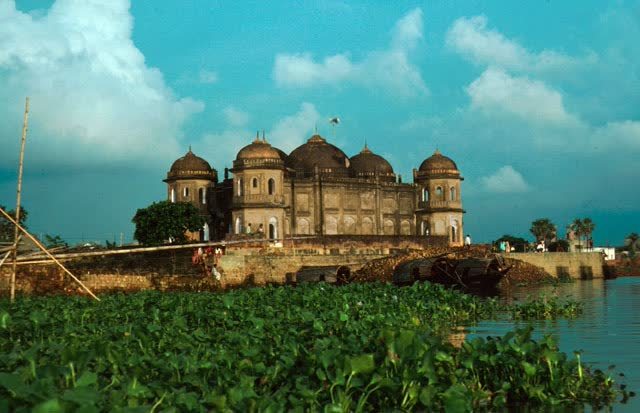 The date of construction of this rectangular seven-domed mosque is problematic as the inscription tablet is long lost. Based on architectural style the approximate construction period of the mosque is around 1680 AD built by Shayesta Khan as it conforms to his style of mosque construction (Mamun, 2008, p 262, Chowdhury & Ahmed, 2006, p 54). Satgumbad Mosque is located in a high density neighborhood of Mohammadpur area of Dhaka city. According to Charles D'Oyly’s historical sketches of Dhaka city, the mosque was located right on a branch of the Buriganga River.

This mosque was probably a derivative form of platform mosque where the original cells/ buttresses has been submerged below ground as the river shifted its course with time. The mosque is a rare design with seven domes. The central prayer hall is similar to the Bengali Mughal type; that is, a rectangular structure crowned with three-domes with a larger central dome. The four domes over the corner pavilions, which replaced the usual corner turrets makes this mosque unique.

The mosque occupies the western end of the platform which is enclosed by a low wall with an arched gateway at the center of the eastern side. The mosque form is 75'2" x 43'9" externally and 47'8" x 16'4" internally with four two storied octagonal corner pavilions. Internally the mosque structure is divided into three equal interior bays, roofed over by three bulbous domes, resting on drums. The proportionately smaller lateral domes are placed on the equal size bays by splitting each dome into a half-dome and placing it on a pendentive. The façade is innovatively articulated, and is a fine example of the provincial Mughal style introduced to Bangladesh in the 17th century.

These corner pavilions rise slightly above the parapet walls. Parapets are straight instead of the curvilinear cornice of pre-Mughal types. The eastern or main facade is visually divided into three sections. Each section contains an entrance doorway that correspond to the three domes above and adorned by cusped arches.  The middle section is emphasized by a frame of slender, engaged columns, a raised cornice, and a larger dome. The eastern exterior façade has a series of deep recessed arched panels whereas western façade is embellished with recessed rectangular panels of usual Mughal style.

The north and south interior walls are divided into a series of horizontal panels, reflecting the motifs on the exterior. The mihrab arches have beautiful cuspings on their faces which is enclosed by a rectangular frame topped by a frieze of blind crestings with the surface embellished in molded plaster relief.

Built on a spacious platform, the mosque belongs to the three-domed oblong mosque typology similar to the Lalbagh Fort Mosque or Khan Mirdha Mosque. The Sat (seven) Gumbad (dome) Mosque owes its name to the three main domes, plus the four domes of the corner towers. Two prominent double storeyed corner pavilions (12' wide) mark the north and south ends and replace the usual towers associated with mosques. Each storey has arched panels and windows that are surmounted by a cornice. The domes of the pavilions are crowned by lotus finials. When viewed from the east the pavilions lend the mosque the impression of having five exterior bays. These features represent all the developed architectural feature of the Shaista Khani period. The east facade has three cusped entrance arches. The central entrance is slightly larger and has multi-foil arches. The two other entrances flanking it have decorations applied only to their exterior faces. Shallow niches flank the entrances, while slender engaged columns with bulbous bases demarcate the central bay. The rest of the exterior surface is covered by paneled decorations.
The mosque was partly restored and repaired by the Department of Archaeology, Bangladesh, and is now a protected monument.
Sources: