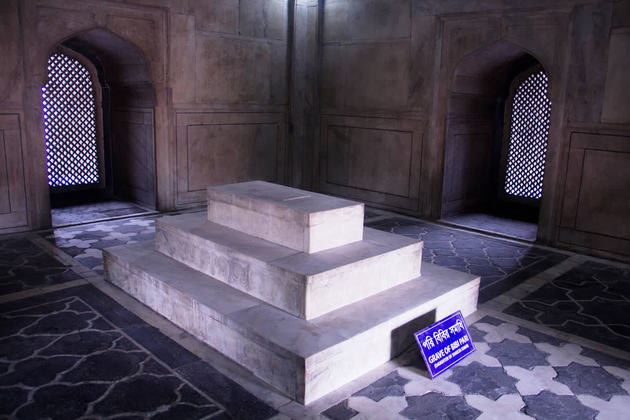 Forming part of the Lalbagh Fort Complex, this tomb is at the center of the complex. Bibi Pari, formally known as Iran-Dukht, daughter of Governor Nawab Shaista Khan, was betrothed to Prince Azam, son of Emperor Awrangzib.

The Bibi Pari Tomb is a single-domed square Baro Duari Bengali type tomb, that is; a square structure arranged with eight rooms surrounding a square central room containing the mortal remains of Bibi Pari. The tomb is situated at the central part of the Lalbagh Fort Complex, aligned with and east of Lalbagh Mosque. The tomb, best preserved of all monuments within the Lalbagh Fort, is built on a raised square platform that is paved with stones. The building's exterior measures 60' x 60' and has four short, octagonal minarets at each corner. These minarets are capped with plastered kiosks with ribbed cupolas. The false copper dome roof is crowned by a tall finial that was once gilded. The facades are identical and centrally projected. The main entrance is formed of a stilted four-centered arch under a semi-dome. The side doors are simple rectangular stone doorjambs and lintels. Plaster panel designs on the exterior walls and towers are decorated in relief.
The structure is buttressed by four corner octagonal turrets, capped by kiosks. These turrets rise above the parapet walls. Parapets are straight instead of the curvilinear cornice of pre-Mughal types. All façades are visually divided into three sections. Each section contains an entrance doorway. The central entrance is larger than the side ones which are slightly narrower and dwarfish. The middle section is emphasized by a frame of slender, engaged columns, a raised cornice. The tomb’s exterior walls are divided into a series of rectangular motives of typical Mughal style. The tomb is roofed by setting stone blocks, one above another, a Hindu system of roofing temples. The dome over the central room, octagonal in shape, was wrapped by brass plate, originally with gold guild.
Internally, the building is divided into nine spaces. The tomb chamber is a central 19' square room, accented by 10' square corner rooms. The dados of the corner chambers were originally decorated with encaustic tiles of various colors. The remaining four spaces are the oblong side passages, each measuring 24'-8" x 10' 8". Excluding the corner rooms, all rooms display marble panels and exquisite black basalt corbelled ceilings. The central chamber is roofed over by a hemispherical dome. All façades have three arched openings each used as entrance.

The entrance to the tomb chamber is restricted to the south. The door is made of sandalwood and decorated with Chinese motifs. Fretted marble screens block the openings on the other three sides. The interior walls of the tomb chamber are faced with white marble, while the floor is laid with geometric patterns of marble and black stones. The white marble was brought in from Rajputana and Jaipur. The three-stepped cenotaph is also made of the same marble and has intricate foliage designs carved in shallow relief. The top of the cenotaph is carved with the takhti motif indicating a female grave.
High-quality materials characterize the building design. The ceiling was of overlapping courses of black basalt from the Rajmahal Hills. Before arches were assimilated into the Indian architectural vocabulary, this method of corbelled ceiling was used to span spaces. Interestingly, from below the ceiling gives the appearance of a stepped pyramid. The reasons why this early, Indian technique was used in this tomb is not yet fully understood. Begum L. Habibullah has speculated that the tomb in fact contains the body of the Ahom princess, Ramani Gabharu. This daughter of the Ahom king Jayaddhwaj Singha was brought to the Mughal harem at Delhi in 1663 as part of the booty of the Assamese war. Upon conversion to Islam, she was renamed Rahmat Banu and in 1668 married Prince Azam. She died suddenly in Dhaka and was buried in Lalbagh. To signify her Hindu origin, the Hindu corbelling technique was applied in the architecture of her tomb.
Sources:

Islam, I., and Noblea, A. Mosque Architecture in Bangladesh: The Archetype and Its Changing Morphology. Journal of Cultural Geography, 17(2), 5-25, 1998.