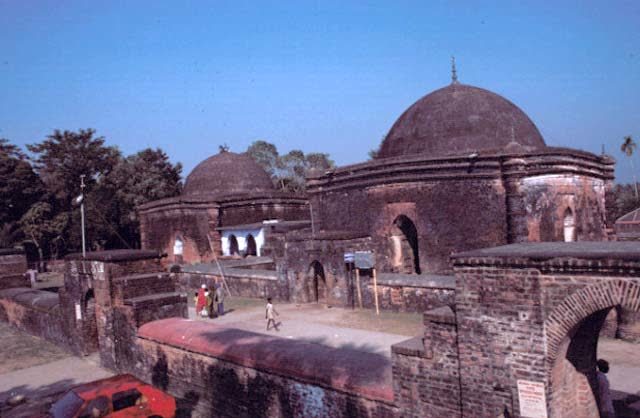 This single-domed mausoleum is dated as 1459 CE and located at Khalifatabad, present date Bagerhat. The tomb was thoroughly restored and repaired by the Department of Archaeology, Bangladesh and it is now a protected monument. Enclosed within a brick boundary, the mausoleum is part of a complex containing an identical mosque and a ruined brick structure with a sloping roof that served, perhaps, as a gateway or the kitchen. Khan Jahan lived a religious life here from his retirement to his death on 25th October 1459. The tomb is part of a larger complex along with the Khan Jahan Ali’s dighi (lake) and a single dome mosque. The mausoleum is situated on the northern part of the complex, aligned with the mosque. The mausoleum is the best preserved of the three structures. It is a 45' square brick structure which rest on a base of five courses of dressed stone. An unpublished manuscript dated 1866 describes the interior of the mausoleum. According to the account given the floor was covered with hexagonal encaustic tiles of various patterns, predominantly in blue, white and yellow. The tomb itself was of black stone and raised on three steps of the same material. It is covered with beautifully carved verses from the Koran in Arabic and Persian. Today the encaustic tiles no longer exist but a number of them can be found set in the three steps around the tomb itself.

Overlooking the beautiful Thakur Dighi (lake), the complex stands on a high embankment made from the excavation material of the dighi. The square artificial lake was construction by Khan Jahan and has a broad, steep flight of steps leading up to the embankment. The Khan Jahan Ali Mausoleum is a single domed square type similar to Eklakhi Tomb; that is, a square structure accommodating a single sarcophagus crowned with a single dome.

The tomb is a square of 47'0" x 47'0" externally while internally it has a square plan of 28'2" x 28'2". The structure is a single chamber, roofed over by a hemispherical dome. All four façades have a single framed arched opening to the hall where Khan Jahan Ali’s sarcophagus is positioned at the center. The dome is internally carried on by four intersecting arches springing from stone pillars and brick pilasters attached to the side walls. Stylistically this kind is known as Khan Jahan Ali architecture, commonly found in and around south-western part of Bangladesh. The most distinctive feature of Khan Jahan's Tomb is its lavishly inscribed sarcophagus. Like most Muslim mausoleums, the actual grave is in a crypt under the building. The walls of the crypt are covered with inscriptions that may contain historical information regarding Ulugh Khan Jahan's life.

The square structure is buttressed by four corner circular turrets. These turrets end at the level of parapet walls and ribbed in typical Bengali Sultanate fashion. The façades are capped by curvilinear cornices of pre-Mughal type. Exterior façades are of plain brick texture with framed arched opening.