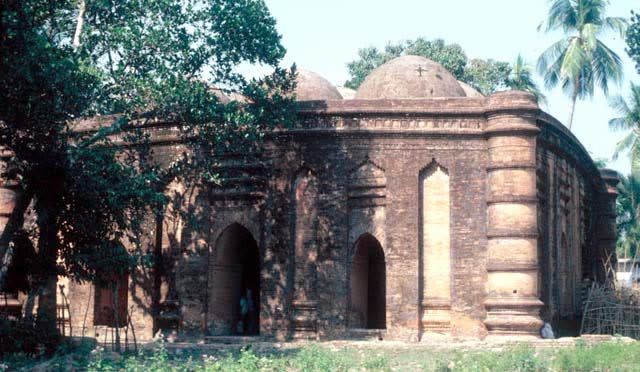 The Nine-Domed Mosque, located on the western embankment of the Thakur Dighi, is locally considered to be contemporary with Khan Jahan Ali style mosques of Khalifatabad, present date Bagerhat, Bangladesh. However, local tradition ascribes the building to one of Khan Jahan's officers who had his residence nearby on the same bank of the Thakurdighi (Banglapedia).  The mosque is situated less than half a km away to the southwest of the Tomb-Complex of Khan Jahan Ali.  Based on architectural style the date of construction can be estimated to be mid-fifteenth century. The mosque is a multi-domed square type Sultanate mosque; that is, a square structure crowned with nine domes.

This small mosque is roofed with nine low hemispherical domes, which are carried on four slender stone columns. It has arched entrances on all but the west facade. The western wall or the qibla wall has three mihrabs, the central one being the largest. Chain-and-bell terra cotta motifs decorate the center of each mihrab. The round corner towers are faceted by eight bands of molding and the outer walls have tall vertical panels terminating in pointed arches below the curving cornice.

The mosque is a square of 60'4" x 60'4" externally while internally it has a square plan of 39'6" x 39'6". The structure is a single chamber, internally divided into nine equal grids roofed over by nine hemispherical domes. The eastern, northern and southern façades have three arched openings to the prayer hall. There are three mihrab, each aligned with the three entrances at east and the central portion of the qibla wall is projected westward from the ground to the roof. Stylistically this kind is known as Khan Jahan Ali architecture, commonly found in and around south-western part of Bangladesh.

The square structure is buttressed by four massive corner circular turrets. These turrets end at the level of parapet walls and ribbed in typical Bengali Sultanate fashion. The façades are capped by curvilinear cornices of pre-Mughal type. Exterior façades are of plain brick texture with developed framed arched opening with horizontal rows of terracotta designs. All entrances are almost of equal breadth while the central ones are slightly taller. There are three terracotta mihrabs in the qibla wall; the central one is slightly larger than the side ones. All three mihrabs are decorated with multi cusped arches and terracotta details.