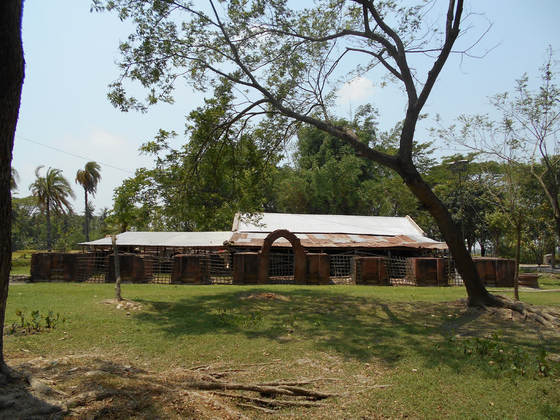 In 1978, local villagers accidentally discovered the remains of the mosque. The mosque was partly restored and repaired by the Department of Archaeology, Bangladesh and it is now a protected monument. It can be assumed from the ruins that it was a multi-domed mosque contemporary with Khan Jahan Ali style mosques of Khalifatabad and located at historic Mohammadabad city, present day Barobazar, Jessore. Based on architectural style the date of construction can be estimated to be late-fifteenth century.

The Satgachia Mosque is one of the larger examples of hypostyle mosques in the region, having a forest of columns topped by thirty-five small domes. The ruin of the mosque is situated on the bank of the Adina Pukur at the western edge of Mohammadabad.

The mosque had an oblong plan of 81'3" x 62'9" externally and 63'7" x 45'0" internally. The structure was divided into seven equal interior bays and five rows, each grid was roofed over by a hemispherical dome. The eastern façade had seven arched entrances opening to a thirty-five grid prayer chamber. There were seven mihrabs, each aligned with the seven entrances at east and the central portion of the qibla wall was projected westward. Stylistically this kind is known as Khan Jahan Ali architecture, commonly found in and around the south-western part of Bangladesh.

The rectangular structure was buttressed by four corner circular towers. Entrance arches were framed with rectangular shallow recesses. Both north and south facades had five arched opening used as entrances. The mosque was enclosed with massive brick walls while the interior was supported by twenty-four massive brick columns. The western wall had seven terracotta multi cusped arched mihrabs on the interior with the central one projected on the exterior.