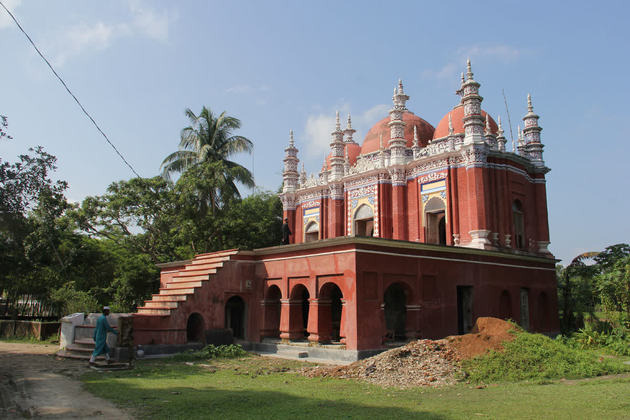 This three-domed, post-Mughal mosque is locally considered to be built during 18th century. The mosque is situated east of a local pond, at Uttar Karapur village of Barisal town. The Karapur Miah Bari Mosque represents a typical Bengali platform mosque; that is, a three-domed mosque sits on a rectangular raised platform.

The mosque is a typical Bengali Mughal type where the central dome is larger than the other two. Externally the mosque is a rectangle of 44'9" x 21'5" while internally it has an oblong plan of 36'9" x 12'10". The structure is divided into three equal interior bays, roofed over by three fluted, bulbous domes, resting on drums. The proportionately smaller lateral domes are placed on the equal size bays by splitting each dome into a half-dome and placing it on a pendentive.

The rectangular structure is buttressed by six corner octagonal turrets, capped by plastered three tiered cupolas. These turrets are rise above the parapet walls and ribbed in post-Mughal fashion. Parapets are straight instead of the curvilinear cornice of pre-Mogul types. The eastern or main facade is visually divided into three sections. Each section contains an entrance doorway, flanked by its own pair of slender engaged columns. The entrances correspond to the three domes above and adorned by cusped arches. The western wall is internally recessed with three semi-octagonal mihrab niches, which are all arched. The larger central mihrab is projected outside having usual ornamental turrets.