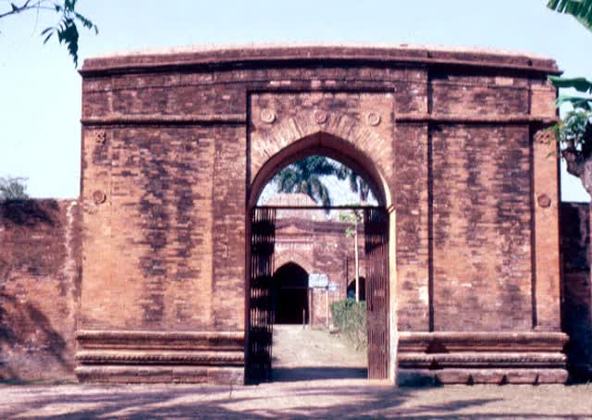 Saith Gunbad Mosque is the largest and most magnificent of the Sultanate mosques in Bangladesh and an important pre-Mughal monument of Indian subcontinent. Built to be the Jami mosque of Khan al-Azam Ulugh Khan Jahan, general of Sultan Nasiruddin Mahmud Shah, probably in his reign during mid-fifteenth century CE. The mosque is located on the eastern bank of the Ghoradighi, about three miles west of the present Bagerhat town of Khulna Division which was known as Khalifatabad during the Sultanate period.

Based on its placement among other important monuments explored in Khalifatabad, the mosque held a prominent position in the city. The residence of Khan Jahan was located on the bank of old Bhairab River, before it changed its course, and the mosque was positioned in its close proximity. It is the largest example of hypo-style mosque in this region, having a forest of columns topped by seventy-seven small domes including seven Bengali charchala vaults.

The mosque has an oblong plan of 148'6" x 101'4" externally and 123'3" x 76'2" internally. The structure is divided into eleven equal interior bays and seven rows, each grid is roofed over either a hemispherical dome or a charchala vaults. The eastern façade has eleven arched entrances opening to a seventy-seven grid prayer chamber.  The central nave, leading to the central mihrab, is covered with a series of seven charchala vaults while rest of the grids are domed. The mosque is the first extant structure in this region to employ the charchala shaped vaults.

The rectangular structure is buttressed by four corner circular towers, capped by domes. The massive two-storied corner towers rise above other domes of the mosque. Facades are topped by gentle curvilinear cornice of pre-Mogul style. Entrance arches are framed with rectangular shallow recesses while the central arch on east, north and south façades are larger. Both north and south facades have seven arched opening used as entrances. The mosque is enclosed with massive brick walls while the interior is supported by sixty sandstone columns. The slender stone columns are formed by two or three stone pieces tightly joined together by a system of plug-holes and iron-craps. The western wall has eleven mihrabs on the interior where ten are blind and the central one is projected on the exterior.

Best known of the monuments found in Bagerhat, this brick building is the largest historic mosque in Bangladesh. The brick walls are unusually thick and slightly tapered. Tapered walls are typical of the Tughlaq style of Muslim architecture at Delhi and are not found in any other building in Bengal. Shait Gumbad or the mosque with 60 domes actually consists of seventy-seven low squat domes. The interior is divided into seven longitudinal aisles and eleven deep bays by slender stone columns that culminate in rows of arches that support the roof. Sixty stone pillars that support the roof creates the impression of a forest of pillars in the interior.

The mosque was restored and repaired by the Department of Archaeology, Bangladesh, and is now a UNESCO World Heritage site.

Hasan, P. Sultans and Mosques: The Early Muslim Architecture of Bangladesh. London: I. B. Tauris, 2007.