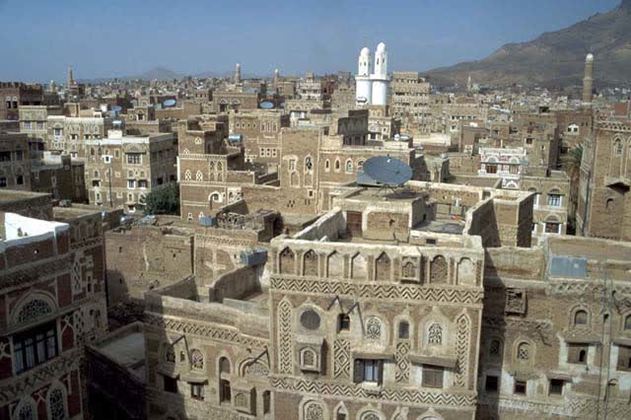 Share
Recipient of the Aga Khan Award for Architecture in 1995.
Since its founding 2,000 years ago, Sana'a has been a major trading centre for south-eastern Arabia. Once a seat of government for the early Islamic caliphs, it is today the capital city of Yemen. Typical houses in Sana'a rise to as many as nine stories. The lower levels are usually built of stone, and the upper ones of lighter brick. The windows are outlined in white gypsum and have fan lights of alabaster or coloured glass held in gypsum tracery. Because the urban expansion of the 1970's and 1980's had begun to threaten and eventually destroy the old city, in 1984 the Republic of Yemen created the General Organisation for the Preservation of Old Sana'a. By 1987, it extended its responsibilities to all of Yemen and became the General Organisation for the Preservation of the Historic Cities of Yemen (GOPHCY). UNESCO and UNDP assisted the preservation planning process, while technical assistance and funding were provided by the Yemeni government and by Germany, Italy, the Netherlands, North Korea, Norway, Switzerland, and the U.S.A. About 50 percent of the city's streets and alleys have been paved with patterned bands of black basalt and white limestone, and the repair continues. Old water supply and drainage systems were upgraded, and craftsmen are restoring the city's mud walls. Numerous buildings dating from the 14th, 17th, and 19th centuries have been restored. The jury notes that "this project has saved old Sana'a."