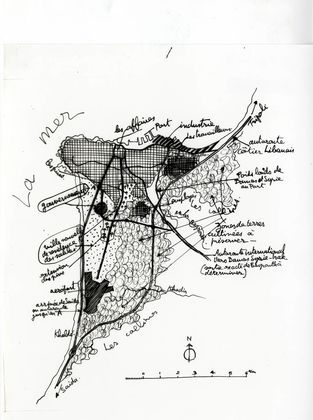 This brief from the Lebanese government is one of a series undertaken by Écochard, beginning with the 1943 Beirut Development Plan through to his study for a Ministry City in 1963. This work was theoretically under the direction and under the control of the Commission of Beirut and its Suburbs.

The master plan foresaw large roads linked with a hierarchy of speeds. Thus, six interchanges, service roads and roads providing outlets from the city center are proposed to service a road junction located outside the borders of Beirut municipality. The regional and national level is expressed in the proposal for a peripheral outer highway, beyond the urban area, and a highway linking the north and south of the country and an array of proposed regional roads. “The network of large roads had the objective of creating a ‘coherent whole’”. It would include, on the one hand, roads penetrating the city from outside, while, on the other, roads connecting different neighborhoods and the new city with the current city center.

Zones in urgent need of development are suggested, including slums, in order to prevent their endless extension. Two new towns are proposed in order to cope with the growth of the city, the first in the south in the same place as that proposed in the 1943 plan, and the other more to the west. The founding principle of this proposal remains the same, namely to build a “healthy city” near the “sick city”; also, the road constitutes the backbone of urban development.

The zoning reflects the vision of a city of varied density. The quantity of construction allowed in various areas actually differs so much that the density allowed on the mountain slopes adjoining the city limits makes it almost rural. The reason given for this urban planning is he safeguarding of the site and its impressive landscape. Two new “centres of attraction” allow less concentration in the heavily populated traditional centre. Located to the extreme southeast and southwest of the city, these two centres help in promoting the suburbs and of course justify, in relation to the new town, the low population densities beyond those limits.

This functionalism leads naturally to a grouping of activities by category, including those involving administration of the state. The idea of a Ministry City had already been envisaged along a southern boulevard of Sidon. The idea was to decentralise commercial activities to new shopping centres corresponding to “the life of a modern city”. Rapid east-west circulation, avoiding the city centre, completed the plan. Zones requiring urgent development were defined through the knowledge the planner had of the city and with the aid of aerial photography. A distinction was made between categories: housing for the economically insecure, slums, shanty towns and hovels.

The new towns were no more built than the Ministry City; the highway project was just beginning to take shape in 1963, and no policy of land appropriation had been set in place. However this plan left its mark on our perception of urban space and urban planning.