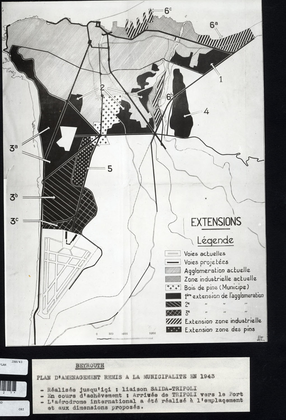 Lebanon was under French mandate when Michel Écochard was detached from his duties as director of urban planning in Syria, at the request of General Catroux, with the objective of establishing a master plan for the city of Beirut. The mandate of France in the Levant was reaching its end during the plan’s elaboration, 1941-1943, and it was a plan conceived completely in the context of the Second World War.

The urban plan of Beirut, completed in 1943, proposed a project based on major thoroughfares, the creation of a new town and a project to reorganize the congested districts in the center of town. The founding principles of this type of planning were very much inspired by those of the Modern Movement. Functionalism and rationalism define this urban zoning in which the separation of functions remains the watchword. Problems related to traffic were amongst the most urgent to resolve. Écochard proposed a "system of circulation" classified into three broad categories. The first, called "bypasses", was to establish a north/south link joining the town of Sidon with that of Tripoli through two stretches of road and a direct connection between the road to Damascus and those to Tripoli and Sidon. The second category, "crossroads", was designed to stop at the outskirts of the stretches of the bypass routes, and create radiating roads within. In order to decongest the city center, drilling new paths to "cut to the heart", as Écochard said, was planned, from the ring road to the city center.

Housing is treated separately as it involves “special needs”, notably in regard to light and climate. The description of the proposed new town on the southern outskirts of the city shows unambiguously the acceptance by Ecochard of the ideas of the Modern Movement, "refusing in the most absolute way to adopt the old principle of construction of streets as corridors lined with adjoining houses". The areas allocated to each owner must allow room to avoid street frontage and allow for the location of buildings in the middle of gardens. The creation of the new city offers a new way of living for "workers", which should provide, in addition to "modernity", more "fairness".

The development of an administrative district offered an image of the city centre that was more modern for its time. Public buildings are grouped together to create an administrative center, along one of the axes of the Place de l’Etoile. Car parking is prohibited in the surrounding streets as a parking space has been foreseen. Traffic congestion is tackled through the removal of the city blocks of Bab-Idriss and the creation of a second roundabout. The separation of pedestrian and automobile traffic is expressed though two separate treatments of space. While the road system appears as the framework of the urban planning proposals, with its hierarchisation and separate roads, priority is given to pedestrian walkways.

In the course of his time in the Levant, Écochard introduced a new way, and, by introducing the premises of urbanism of the Modern Movement, he began a new form of intervention in urban space under French administration, which did not become widespread until after independence.