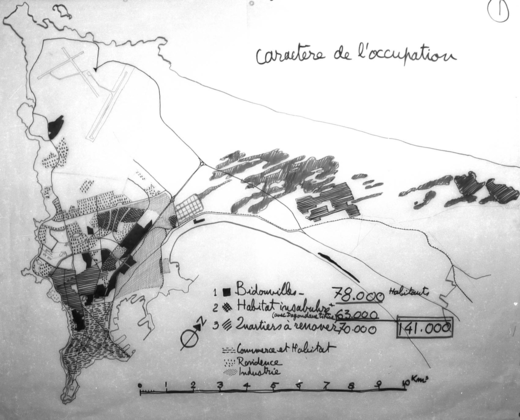 Michel Écochard was chosen to elaborate a new urban plan for Dakar and Cap Vert  in 1963, and after three years of studies, he submitted a preliminary design proposal. It was drawn up in the expectation that Dakar would continue its steady growth and reach a population of 1.2 million by 1980. His plan endorsed the urbanization of the existing areas of SICAP, Grand Yoff and Pikine, trying to integrate those left behind by the “Haussmannisation” of Dakar. Taking up the principles of the Charter of Athens, he proposed a complete urbanization of the peninsula to the Isthmus of Thiaroye.  The plan limited the eastward expansion of Pikine along the “neck” of the peninsula and foresaw the joining up of Pikine and Dakar through development of areas with an average population density of 200 inhabitants per hectare.

The plan envisaged the renovation of the old city and the construction of large areas of small houses for the middle classes joining up the urban poles of Pikine and the SICAP-HLM areas. Two main circulation axes  were foreseen defining a residential zone along the coastal fringe and enabling a move south for the commercial and business center. He envisaged farmlands to the north of the peninsula being developed into plots for economical housing with blocks structured as neighborhood units around primary schools, while the maritime areas were to be developed for tourism, with industrial zones along the coast from the port to Thiaroye.