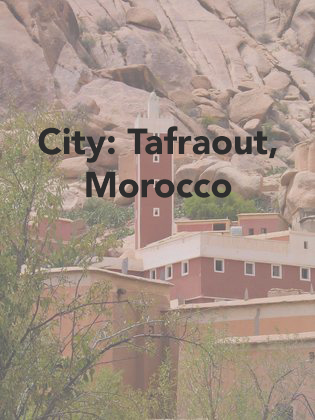 The city of Tafraoute came into existence in the 20th century when the French Protectorate consolidated a number of existing villages and douars at the south end of the Ameln Valley in the Atlas to form an administrative district headquartered in the town. However, the area has been inhabited since the prehistoric era, as is evidenced by rock art in close proximity to the town.  It is a mountain oasis in the Souss region of Morocco, located at 1,200 m altitude.  It is known for the almond trees the bloom in the spring, the cultivation of olives and grains, its Wednesday souk, and the remarkable landscapes formed in rose colored granite peeks that surround it.  Through the millennia the rock in the area has been shaped into enormous boulders and unusually shaped geologic formations.
The Ameln valley is named for the Amazigh tribe that resides there.  It's architecture is an interesting blend of vernacular architecture made from the red stone of the region, some protectorate era structures, and newer large villas, most of which were built with funds sent back to families in the region by emigrés who left the region for Moroccan cities to the north, as well as other countries.  This high level of emigration from the region is generally provoked by periods of drought and the resulting challenges to agriculture and the economy of the region.
The remarkable landscape attracts hikers and climbers from around the world.  A number of hotels cater to these travelers, most notably Hotel Les Amandiers, a 25 room, four-star hotel in the center of town that offers a swimming pool, meeting rooms, and a restaurant.
Sources: 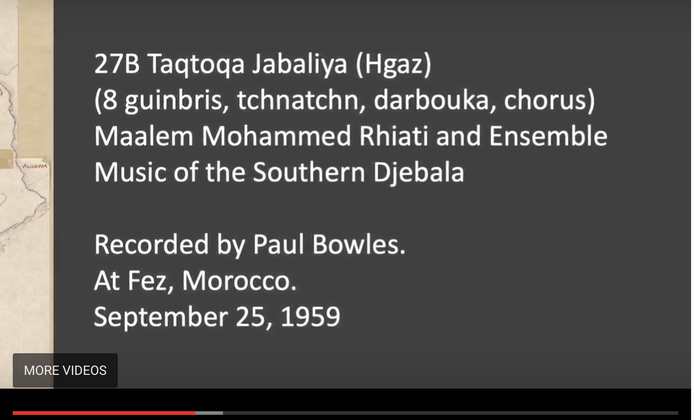 "The first thing I noticed about the 10 men who form this ensemble when they filed into the recording room at the Musée de Batha was that they were exactly the same man to whom I used to listen in 1947 and 1948 on Friday nights when they gave gave regular concerts in another part of the palace. I should say that at that time the average age of the members of the group was 55; now they were all 12 years older, and no new faces had been added. I made a point of asking if they had any young men being trained as replacements; the reply was negative.

This is essentially Djebala music, but Djebala music which has had long contact with the civilizing influence of the city of Fez. The people of Fez consider it "country"music, and they are right; nevertheless, no country music has the sonorous richness of this country music arranged for city people's taste. Compare the Aaita Djebaliya bel Kamenja (no. 1 of 18A), which is also a taqtoqa in more rudimentary form. (The final section of a taqtoqa provides an opportunity for improvisation above an organ (sic) point on each note of the original scale.) The fault I have to find with the taqtoqa of this present tape is that the "specialist" brought from Rabat cut short the otherwise lengthy first section of the piece, for reasons best known to himself, and thereby ruin the equilibrium of the taqtoqa's form. Before the song has even established itself, we are already into the final section. The sonority, however, is gratifying. I know of no other music in Morocco where the guinbri is treated with such seriousness. There are three types used here: the hajouj, the frakh, and the souissane. The tchnatchn are finger cymbals, the same that in Tafraout are called tismanaïne.

NOTE: The apparent orthographical chaos: (djebaliya, 14B; djavaliya, 18A; djebeliya, 21B; jabaliya, 27B) is a result of my phonetic transcription of regional (and possibly personal) variations on the adjective derived from the word for mountain."