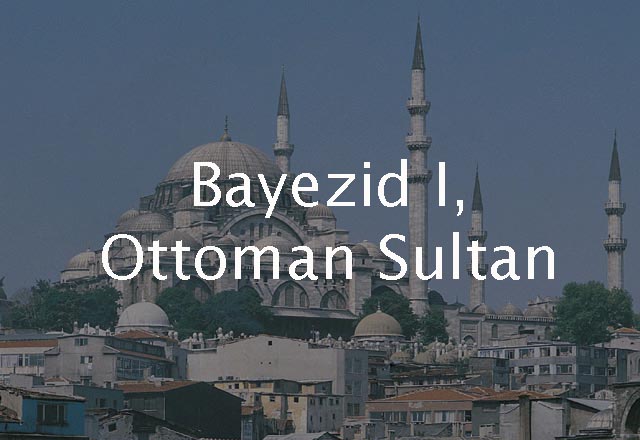 Bayezid I, known as Yıldırım (the thunderbolt) was the fourth Ottoman sultan. He is known for his military prowess, as well as for establishing the first version of a centralized Ottoman empire, which nevertheless collapsed again after his death in 1403/805 AH.
Sources:
Halil Inalcik, "Bāyazīd," in Encyclopaedia of Islam, Second Edition, edited by P. Bearman et al. http://dx/doi.org/10.1163/1573-3912_islam_SIM_1302 (accessed April 20, 2018). 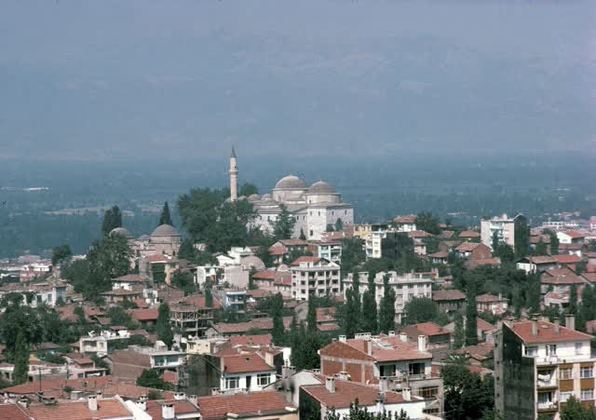 Yıldırım Bayezid Külliyesi is a mosque complex located in Bursa. It is situated on a hill, in what was once a suburban village called Orta Kızık, now overtaken by the modern city. The complex included a dervish lodge and mosque (zaviye), two madrasas, a tomb, a bath (hammam), a caravanserai (han), a hospital (darüşşifa), as well as kitchens and stables. Today, only one madrasa, the mosque-lodge, the tomb, and the hammam survive. The complex was named for its patron, Ottoman sultan Bayezid I, known as Yıldırım, who ordered its construction between 1390 and 1395/793 and 798 AH. The complex has undergone significant change and since its construction at the end of the fourteenth/eighth century AH. Namely, and earthquake in 1855 resulted in damage that was rebuilt in the 1870s, and further restoration took place in 1948.

The buildings of the complex are situated on different levels of the hill, taking the topography of the site into account. The mosque/zaviye occupies the highest point on the site and can be seen from the surrounding areas.

The  mosque/zaviye is based on a reverse T-plan with a five-bay portico leading through a vestibule to a central hall flanked with iwans on the east and west and a larger iwan with the mihrab niche to the south. Four additional rooms located to the north and south of the side iwans are accessed from the central hall. The southern wall of the northern rooms has been fitted with ornate plaster shelving with fireplaces (ocak) at the center. Stairs lead to the upper floor from the vestibule at the entrance where a corridor along the front façade meets the minaret steps. On the interior, the central hall and the prayer hall are crowned with domes; the lower dome of the prayer hall is supported on a chevron band. Beneath, the heavy hipped arch of the prayer hall meets the ground with muqarnas niches at each end, the feature known as "the Bursa arch."

On the northern façade, the marble portico with its inner and outer arches, muqarnas mihrab niches and balconies create a dynamic composition. The balconies serve as a landing for the stairs behind the façade. The casement windows on all façades are bordered with marble toothing, molding and inscriptions in relief and crowned with ogee tympana. The two minarets, which were rebuilt following the earthquake of 1855, have since collapsed. The single minaret on the western side of porch dates from 1972.
The mausoleum was built lower on the hill to the north of the mosque. Bayezid I’s son, Süleyman Çelebi, ordered its construction in 1406/809 AH, and the architect was Ali bin Hüseyin. The structure is composed of a single domed room with a three-bay domed portico. The entry arch of the portico falls on two slender Byzantine columns of red marble. The mausoleum was rebuilt after the earthquake of 1855, and it is possible that the entire structure is modern, but based on the original plan.
The remaining of the two madrasas is sited next to the mausoleum, to the northwest of the mosque. It is a long, rectangular building around a central courtyard. The entrance to the building is on the southeast side, which is the short side of the madrasa. Opposite the entrance on the other short side is a domed iwan that served as the dershane (classroom). An arcade surrounds the central courtyard on three sides: the northwest side with the iwan has no arcade. The bays of the arcade give onto twenty rooms. Like the mausoleum, this building was destroyed and heavily reconstructed.
The baths (hammam) on Yildirim Street to the southwest of the mosque is still in use but has lost its original character. The hospital, a building similar in plan to the medrese located on the east, is now in ruins; it used to have fourteen rooms with individual access to a circulating sewerage drain.
Sources:
Ayverdi, Ekrem Hakki. Osmanlı Mi‘mârîsinin Ilk Devri 630-805 (1230-1402), 419-440, 447-460, 464-469. Istanbul: Baha Matbaasi, 1966.
Baykal, Kâzim. Bursa ve anitlari. Turkey: Türkiye Anit-Çevre Turizm Degerlerini Koruma Vakfi, 1982.