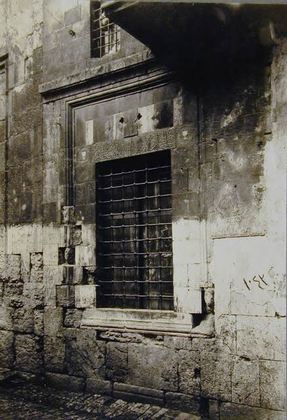 Although the inscription on the southern façade above the main window commemorates the death of the amir Taz in 763/1362, it does not refer to the date of the construction of the building or the founding of its waqf. However, by relying on architectural evidence, the mausoleum that has been used in the past as a madrasa, was probably built in 762/1361.

Its founder was the Amir Taz who was a Mamluk slave of Sultan al-Nasir Muhammad Ibn Qalawun. He held various significant posts during the Mamluk Dynasty such as that of the sultan’s butler (saqi), which was a very delicate post during this period. The emblem of the butler was a chalice, which explains the existence of one amidst the above-mentioned inscription plaque. After he had attained the post of Governor of Aleppo, his luck declined; he was arrested and later exiled to Jerusalem where he resided and established Madrasa al-Taziyya. Many historical references mention him, his relatives, and others whom he freed from bondage in Jerusalem.

Despite the fact that the foundation inscription refers to the edifice as a mausoleum, reality and documents reveal it had various functions. Salaries were paid to its jurists, readers and tutors; these were covered by its waqf, which comprised the village of al-Miniya, which lay northwest of Lake Tiberias.

The Taziyya has one western façade that is divided into two parts, lower and upper. The lower part has a simple door that leads into the interior. To the west of the entrance is a rectangular window that is surrounded by a deep-set frame and covered by Mamluk-style metal grills. On top of it is a lintel upon which a foundation inscription was engraved. Above it is another lintel of beautiful joggled inlay. The stones of this part have been constructed in the ablaq style. The upper part of the façade, on the other hand, has well-arranged courses and a wooden mashrabiyya dating back to the 13th/19th century, and three windows above it.

The building consists of two floors. The first floor has two parts; the southern part has an entrance, stairs and two halls, each of which is covered by a cross vault. The northern part of the first floor also has two large halls that are reached through a corridor that lies to the east of the halls in the southern part. There is also an iwan that leads to a large, cross-vaulted hall and which overlooks the main road from the south. Some residential quarters are found to the north, most of which were rebuilt during the Ottoman period, and some of which have been covered by a small, shallow vault.