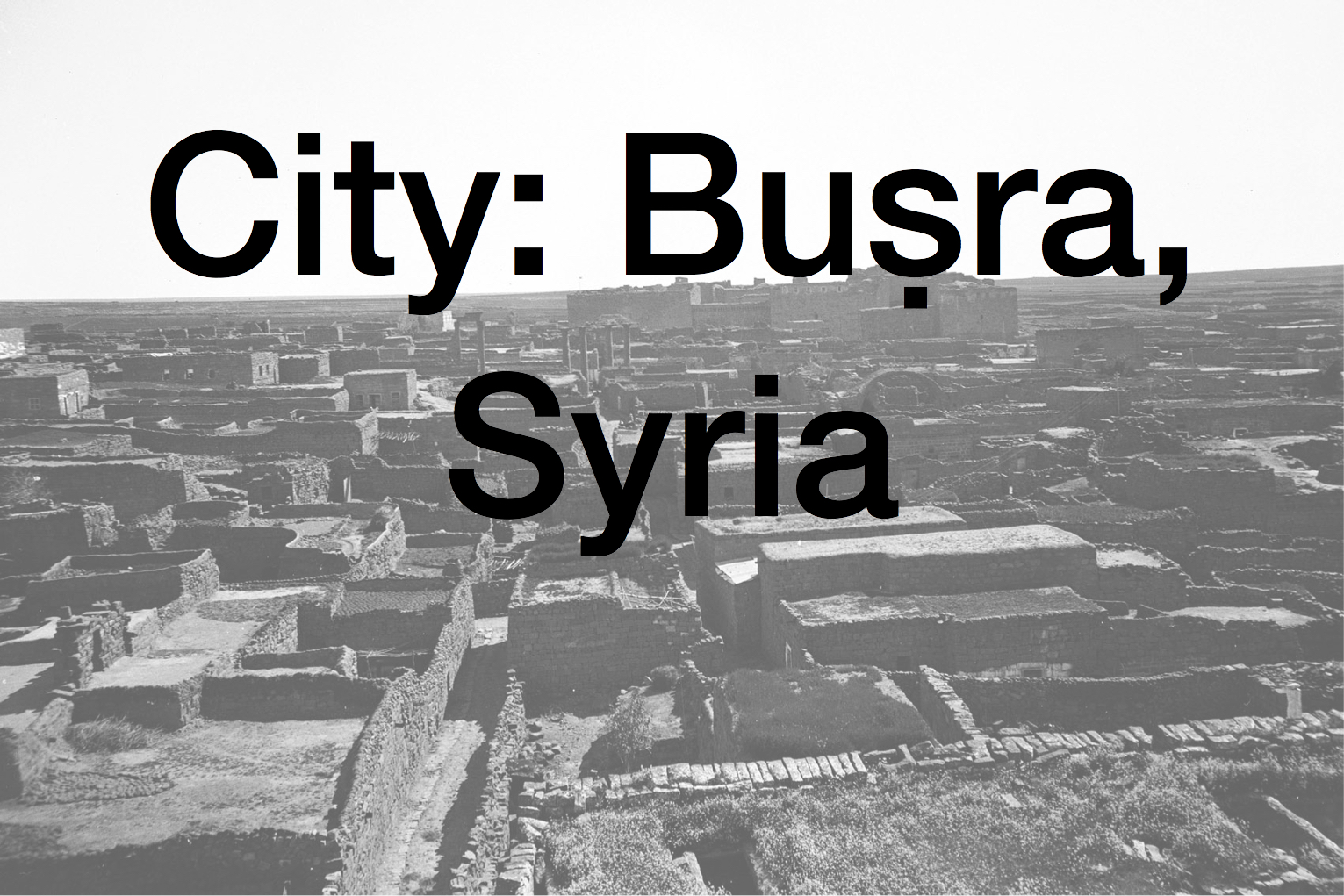 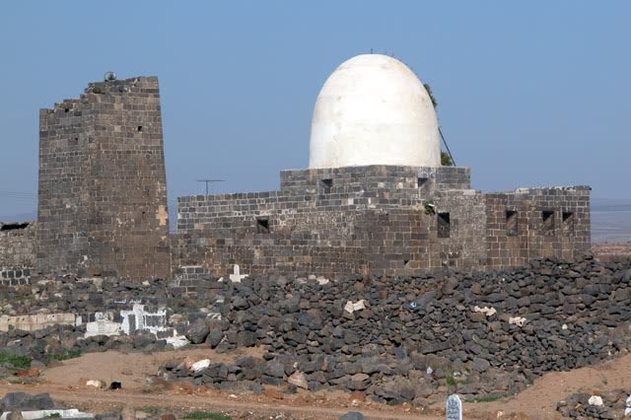 Share
The madrasa complex of Abu Mansur Kumushtekin is situated at the northeast corner of the walled city of Busra. The building occupies a sacred site where Muhammad is said to have prayed during his stay in Busra. Holes found on a stone slab near the mihrab in the southwestern room are said to be the knee imprints of the Camel that rested here while bringing the first Koran to Syria (mibrak al-naqa). Accordingly, the mosque was built here in the early days of Islam and called al-Mibrak, or, " the mosque of the kneeling spot".

The al-Mibrak mosque is located at the eastern side of the complex and consists of a small prayer hall with a mihrab (built in the Hauwran style) preceded by two open courtyards to the north: each courtyard has a doorway facing the street to the north. The prayer hall measures 6.5 by 13 meters and is divided into two halves by a grand arch that supports a flat roof. A Greek inscription, found in the relic room, shows that the mosque was once attached to the city walls that no longer exist at this location. Izz al-Din Abu Mansur Kumushtekin, the commander in chief of the Burid Atabeg Tughtakin (1104-1128) and his son Bori (1128-1132), modified the small existing structure by adding a mosque, a minaret and a madrasa in 1136 to serve the Sunni Hanafi belief. The square minaret was built atop the roman city walls abutting the mosque courtyard; it is now only accessed from the rooftop. The madrasa built by Kumushtekin is the oldest surviving madrasa in Syria.

The madrasa is built adjoining the eastern wall of the mosque and follows the four-iwan typology, which was invented by the Seljuks in Iran and spread to the rest of the Muslim world during the eleventh century. It consists of four rectangular iwans surrounding an open paved courtyard. The southern iwan gives access to two side rooms and to a qibla wall with a mihrab which projects south past the two rooms. The northern iwan is also flanked by two rooms, one of which gives access to the street and the adjoining mosque courtyard. The four iwans are covered with flat basalt roofs; an additional arch was placed at the center of the southern iwan to support its roof. The courtyard façade of the southern iwan has three doorways topped by arched windows. This feature is repeated on the shorter façade of the north iwan. The courtyard was probably covered by a wooden dome, which has not survived.

During the nineteenth century, the madrasa was used as a mausoleum for Muhammad Pasha, the son of Abbas I (1848-1854) who died near Busra. Said Pasha, the viceroy of Egypt from 1854 to 1863, ordered a major restoration for the building; the wooden dome over the courtyard was rebuilt and the floors of the side iwans were elevated. The paving of the courtyard was also renewed and the interior walls were repainted with stucco during this restoration. The minaret, which was near collapse, was partially rebuilt and restored in the 1960's. Most recently, between 1986 and 1989, the Busra Directorate of Antiquities and the German Archaeological institute restored the complex for religious use.